It's not always possible, but given the choice, I'd rather fail at an attempt of doing something new rather than succeed in repeating something I've already done.  My friend Marty was kind enough to accommodate my craving for doing new things by hiking to Mt. Jasper from Berlin, NH, followed by a hike later in the day to Pine Mountain from Gorham, NH.  Having never hiked to Mt. Jasper, this was a completely new experience.   And although I had previously hiked to Pine Mountain, it was a new experience to launch the trek from the trailhead at the end of Promenade Street in downtown Gorham.

My curiosity regarding Mt. Jasper was piqued after reading about the trail work done in 2011 by young workers in the Jobs After Graduation (JAG) program.  Trail experts from AMC's Camp Dodge provided leadership and tools to assist the program participants with the rock staircases, improved drainage, and treadway definition on a mile-plus segment of trail leading to the ledges atop Mt. Jasper.  This hiking trail is accessed from the Berlin High School's parking lot at the end of Madison Avenue.  The blue-blazed trail is on the right immediately after entering the corridor for the snowmobile trail at the north end of the athletic field.

Upon reading some history about the Berlin, NH area, I learned that the Androscoggin River back in the day, was a massive highway for the Abenaki Indians.  Mt. Jasper is a rich source of rhyolite which is a material that the Indians used as a substitute for flint in making tools and weapons.  Evidence suggests that at least every few years and perhaps every season, the Abenaki would stop at Mt. Jasper to gather a supply of rhyolite.

And so, with that brief introduction, here are some details and photos about our trek to Mt. Jasper on 03-December.  First of all, it must be stated that the hike to the ledges is extremely short, and very easy.  Within 20 minutes of leaving the trailhead, we were standing atop the ledges!!

Speaking of the trailhead, you can see the ledges on Mt. Jasper as you begin your hike.  The photo below shows the current-day view from the trailhead and it is juxtaposed with a similar photo taken (not by me) about 40 years ago.  (Click HERE to link to the website location for the old photo.) 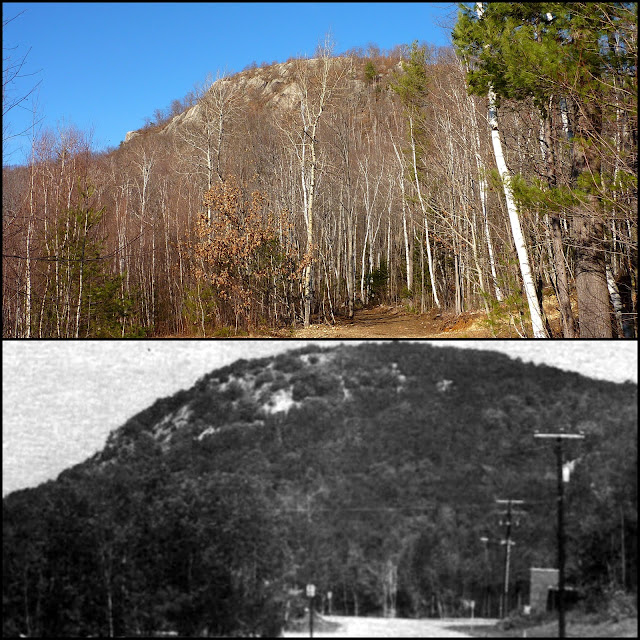 Regarding the views from the ledges on Mt. Jasper, as would be expected, there are views of downtown Berlin (as seen in the next photo). 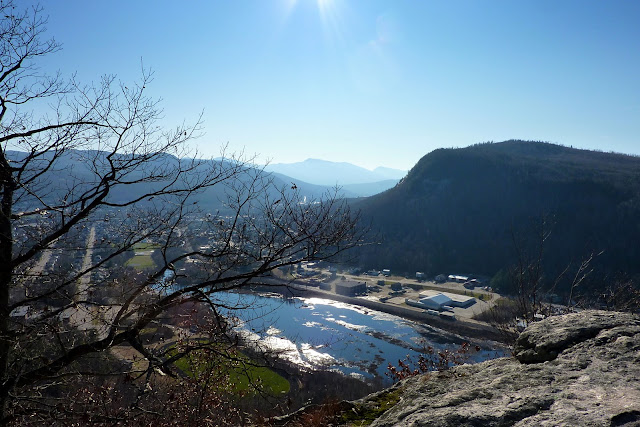 Besides the cityscape views, there are other vistas which are very nice.  One vista that I found particularly impressive was the extensive lineup of mountains in northern New Hampshire that can be seen from this location.  This lineup is shown in the next photo.  A portion of the Weeks Range is on the left and the twin-humped Percy Peaks is on the right. 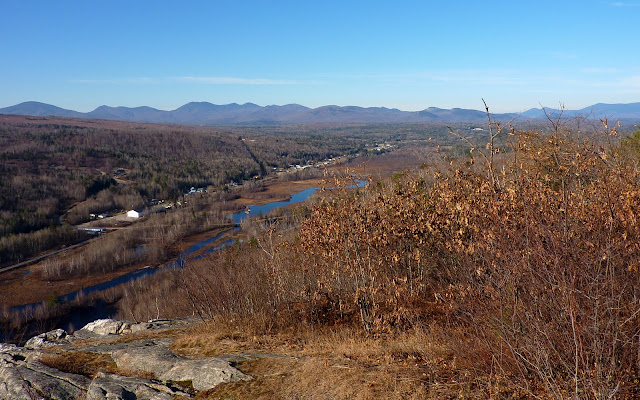 Another impressive view is seen looking eastward toward the Mahoosucs where Goose Eye Mountain is a very prominent feature (seen just beneath the small image of a hawk flying overhead).  Just as a reminder, any photo can be enlarged by clicking on it. 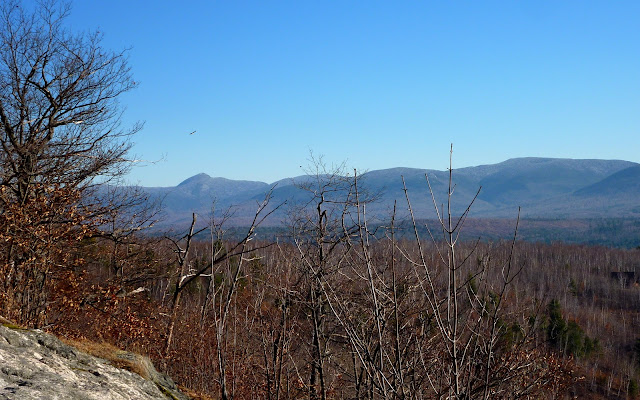 The next photo also shows a portion of the Mahoosucs (far right background), along with a portion Mt. Jasper's attractive ledge in the foreground. 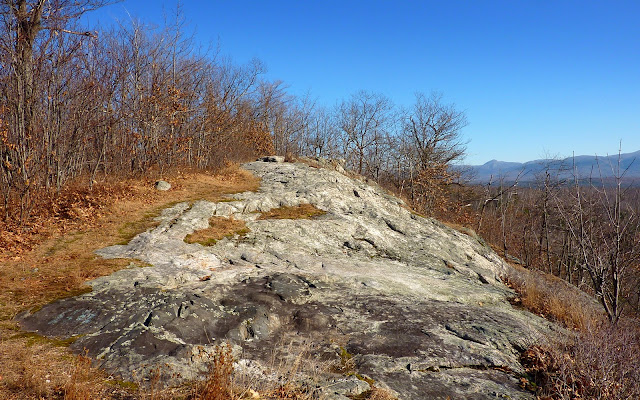 Invariably, there is some new tidbit of information that is learned from every new hiking adventure.  Here is what I learned as a result of this particular quest.  While hiking the Pine Mountain Trail, Marty and I noticed sporadic white blazes on trees along the trail.  They were faded, and there weren't many, but there were enough for us to take notice.   We even joked about someone getting mixed-up and using the wrong paint color for blazing the trail.

After our hike, I read in AMC's White Mountain Guide that the Appalachian Trail (AT) once followed the same general corridor as the current-day Pine Mountain Trail, and thus I presume that this might explain the white blazes!  I also did some snooping around on the Internet and came up with an article in the Conway Daily Sun that was written by Ed Parsons.

Shown below are a few snapshots that were taken during our hike.

View of Carter Range as seen from Chapel Rock 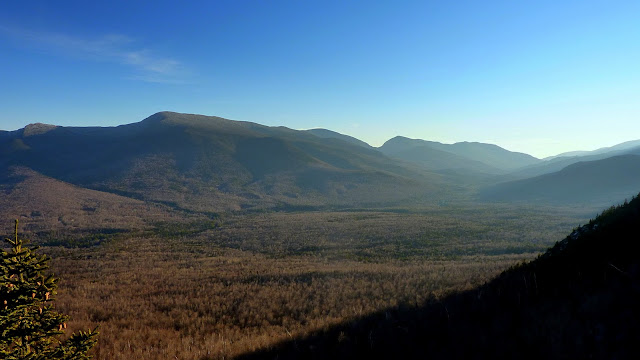 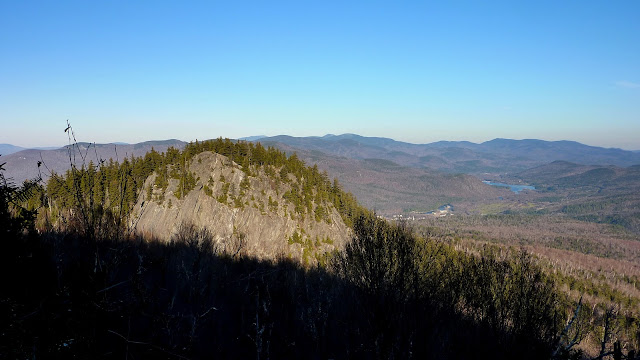 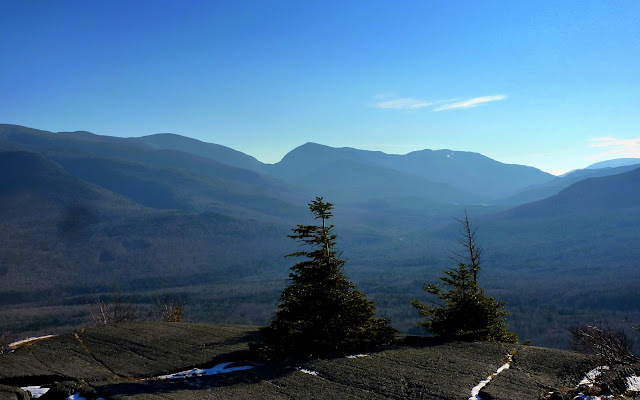 View of communication towers atop Pine Mountain (If you use your cell phone when hiking in this area of the White Mountains, chances are good that your signal passes through here!) 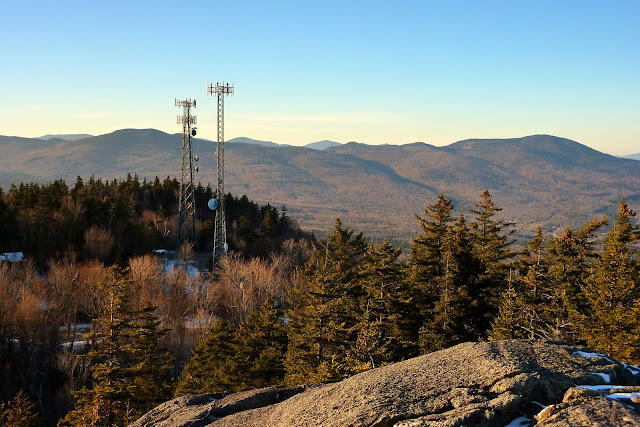 Trailhead Sign at the end of Promenade Street in Gorham (We squeezed every ounce of sunlight out of the day, and it was nearly dark by the time we arrived back at the car.) 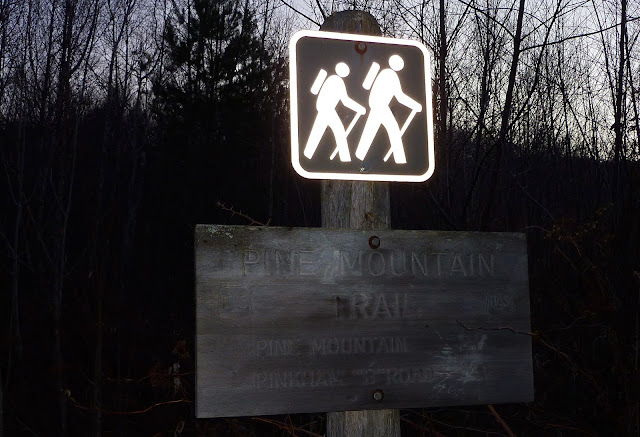 To sum it up, I can think of little else to say other than something new often equals something good!  Not only was it fun to experience the thrill of two new hiking adventures, but it was equally fun to learn new information about the areas where we hiked.
Posted by 1HappyHiker at 10:06 PM

Beautiful late fall views from Pine Mtn. A couple more short hikes to add to our to-do list. Thanks as always for tips on trailheads and background information. I see just a bit of snow on Pine Mtn - the warm days just keep coming with no serious signs of winter yet.

Ellen, thank you for posting your comments. Yes, this bit about “no serious signs of winter” has gone on far too long! What we are having here now in New Hampshire is typical of what most of the winter season was like in the State of Delaware (several hundred miles to our south) where I lived and worked for many years. Winters there basically consisted of a “stick season” that lasted for many long and dreary months!

What a fun adventure and good views for little effort! I immediately thought old AT route when you mentioned the faded white blazes. For some reason it rang the right bells in my head although I couldn't tell you where I've seen that information before.