An Autumn Trek to East Rattlesnake and Five Finger Point

The 1981 movie "On Golden Pond" immediately comes to mind each time I hike in the Lakes Region of NH.   As many readers will recall, this film starred Henry Fonda and Katherine Hepburn, along with Jane Fonda.  The story centers around an aging couple, Ethel and Norman Thayer, who spend each summer at their home on a lake called Golden Pond.
It’s little wonder that the filmmakers chose the Squam Lake area as the setting for this movie.  It is a gorgeous place all year-round, but especially picturesque in the autumn season.  With the colors of autumn starting to fade near my home in northern NH, I decided to drive south to the Lakes Region where colorful foliage remained vividly present on this 24th day of October.
To soak in as much of this beautiful day as possible, a rather convoluted route was chosen.  I began and ended my hike at the trailhead for the Butterworth Trail.   My route is highlighted in yellow on the map that is shown below. 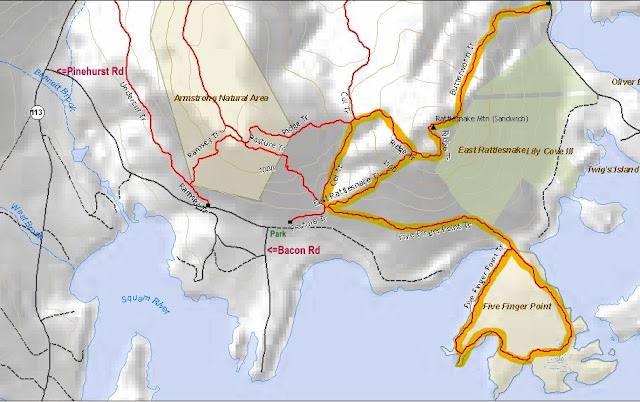 From the trailhead for the Butterworth Trail, you get a pleasant view, even you begin to hike (see snapshot below)! 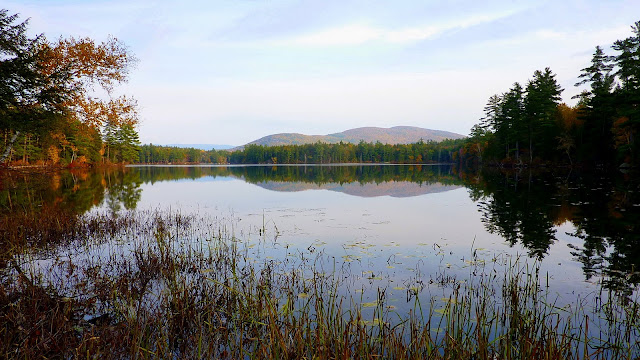 Regardless of which trails you hike in the Squam Lake region, it is pleasant and easygoing. And during the autumn season, there is plenty of color to delight the eye.  The snapshot below shows a scene along a typical segment of trail. 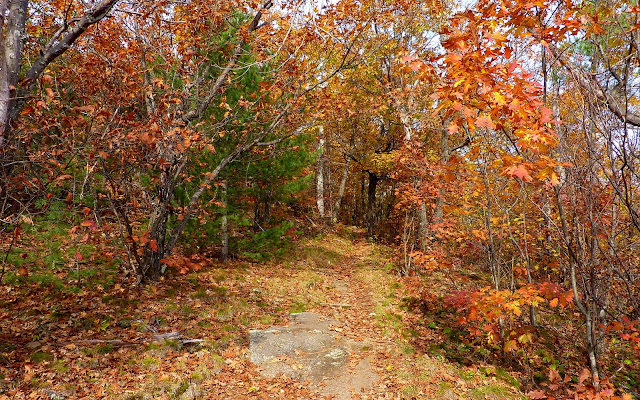 My route took me over the ledges on East Rattlesnake where there are sweeping vistas overlooking Squam Lake.  The next two photos were taken from the East Rattlesnake ledges.  The first snapshot is a broad overview.  The second photo is zoomed, and if you look closely, you can see a boater enjoying a terrific autumn day on the water. (NOTE: Clicking on any photo in this Blog will enlarge it.) 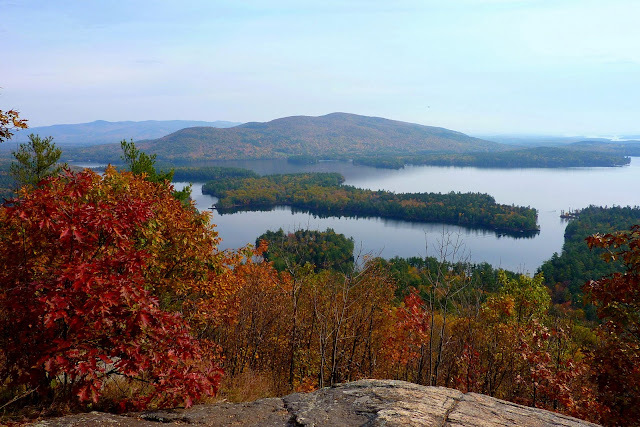 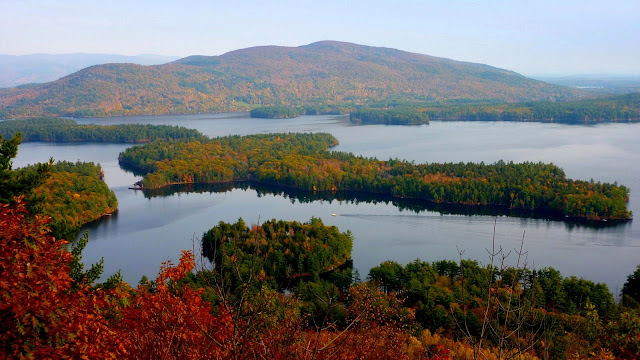 On previous occasions, I had visited the ledges on East Rattlesnake, but the next destination of this trek was new to me.  For whatever reason, I had never take the time to trek to Five Finger Point! 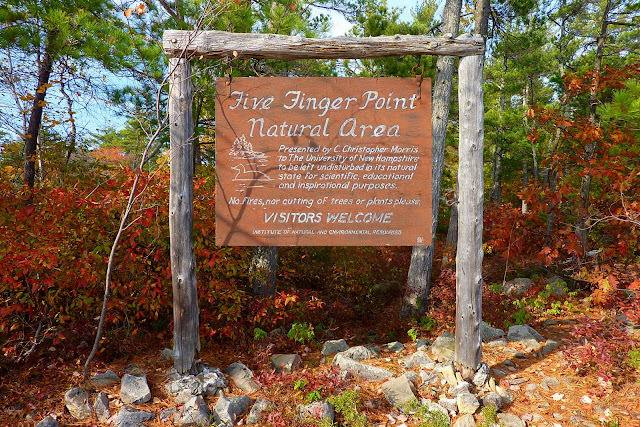 Wow!  I was totally amazed by the gorgeous scenery along the loop portion of the Five Finger Point Trail.  The next 4 photos show just a small selection of the many scenic spots along this trail.
A cove with wonderful reflections! 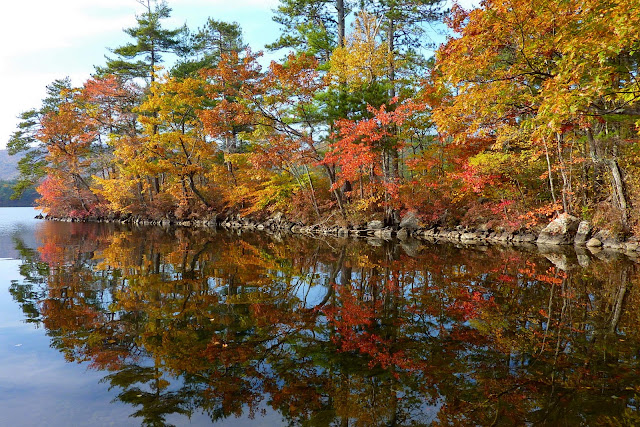 A cove with a sandy bottom that looks ideal for summertime fun! 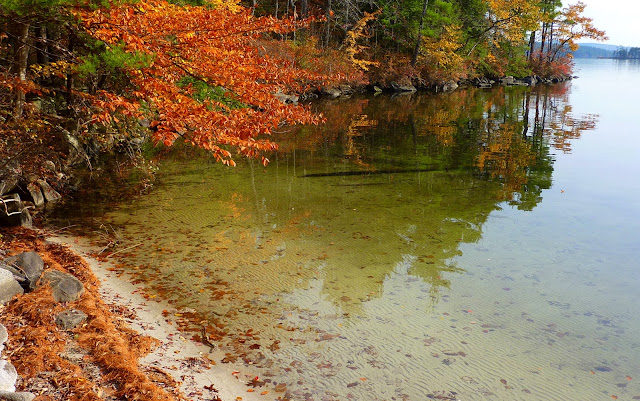 Yet another picturesque cove along the Five Finger Point Trail! 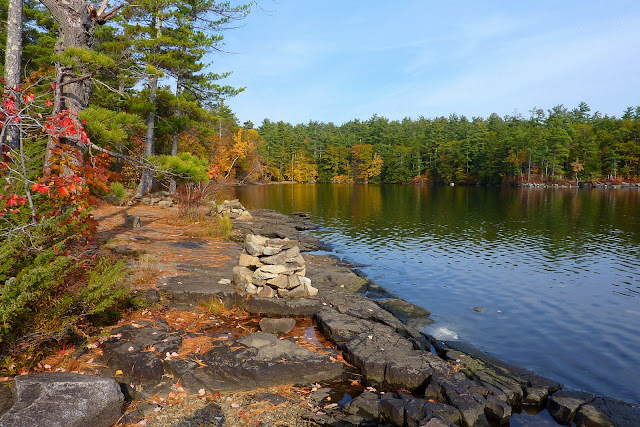 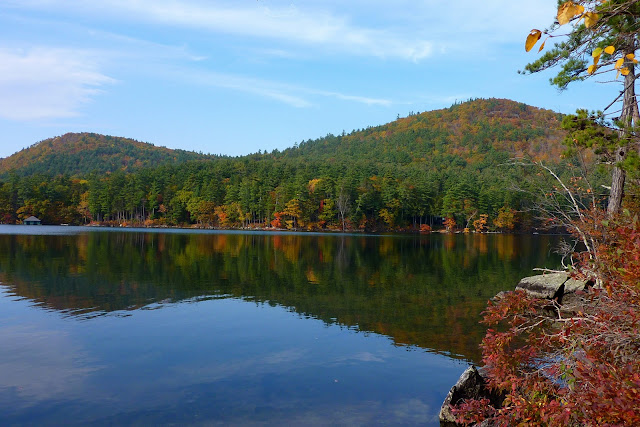 In addition to scenes like those shown in the 4 photos shown above, you can also catch glimpses of many attractive homes that dot the shoreline.  The one shown in the next photo reminded me of Ethel and Norman Thayer's home from the "On Golden Pond" movie. 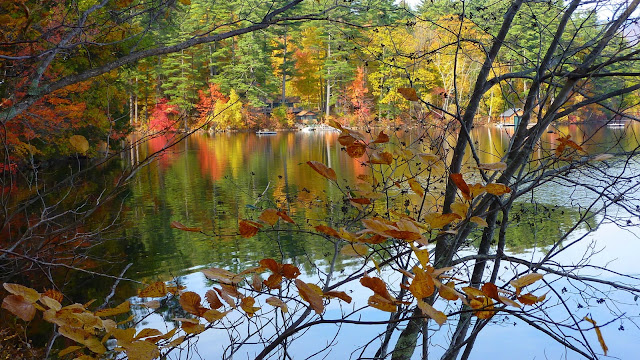 On the way home, I made a side trip to confirm a more direct route to the Five Finger Point Trail (just in case I might ever want to do that as a short stand-alone hike).  I took Pinehurst Road off of Rt. 113 and then made a right turn onto Bacon Road.  Immediately upon turning onto Bacon Road, there is a small (unsigned) parking area on the left side of the road.  After walking a few paces back to Pinehurst Road, I walked eastward along the road for about 100 yards and then exited left from the road at the trail signboard.  After following the yellow-blazed trail (Pasture Trail) for about 0.2 mile, I came to the beginning of the Five Finger Point Trail.
To sum it up, the chances are good that my trek to the Lakes Region will be the last time for experiencing the full splendor of autumn foliage, at least for this time around!  But, there is always next year to look forward to!  So now, it's time to start getting excited about the good times ahead for snowshoe hikes, and cross-country skiing!
Posted by 1HappyHiker at 5:02 PM

Great trip report John. A friend and I made a loop over both peaks last November on a day where the temps were in the 70's! That area is quite beautiful.

Thanks for your comment, Jacob!
Wow . . . hiking in 70 degree weather in November . . . and in NH! How wild is that!?
And yes, I completely agree with your comment about that Lakes Region being a beautiful area!

Stunning photos John. Lovely spot. The calm water and surrounding fall foliage is just beautiful. I'm jealous of those living in such a place, although nice that people have dedicated a few places that we can all visit and share in the beauty.

ELLEN: I wholeheartedly agree that it is so very nice that there are thoughtful folks out there who have generously provided public access to many of the beautiful places in NH. The Five Finger Point area is certainly one of those remarkable spots!

ELLEN and ANONYMOUS: Thank you for your kind remarks about the snapshots taken on this hike.

Wow, the colors you captured are amazing...and the reflections too. I've done Morgan and Percival across the street before, but never the Rattle Snakes. Looks like a pretty good network of trails.

I'm really surprised that you found this much color, this late in the season. I hope it's not the last time you see the "full splendor of autumn" this year.

Hey Karl . . . although there are still pockets of splendid autumn colors up here above the notches, the “full splendor” is either faded or gone! And so, unless I plan another trip southward toward your end of the State, my hike in the Lakes Region will likely be my last truly magnificent experience with autumn for this season.

Thanks for posting your thoughts, and for your generous comments about the snapshots that were taken.

Thanks for sharing your amazing photos of this beautiful place.
As always, John, your commentary and pictures put me right into the scene. I think I'm going to have to pick New Hampshire for one of my "successive autumn" trips!
I'm thoroughly enjoying your blog!
Rita
http://www.onedayinamerica.blogspot.com

And yes, do give some serious consideration to northern NH or VT for one of your “successive autumn” trips. It’s unlikely that you’d be disappointed!

Beautiful! And yet, it's almost hard to believe that was just a few days ago, with snow now falling from the sky. What an interesting fall it has been.

SUMMERSET and RYAN: Thanks guys for taking time to post your thoughts . . . very much appreciated!

_ Summerset . . . just like you and Karl, I also have on several occasions hiked the higher peaks "across the street", i.e. Percival and Morgan. But to use a sports analogy, sometimes I think it's better to hike closer to the playing field where you can get an up-close view of the action, rather than viewing things from afar at the top of the bleachers! :-)

_ Ryan . . . funny you should mention the falling snow! As I type this reply, snow is quickly accumulating as I look up at the skylight above me! And to think, it's not even Halloween yet!

Snow before Halloween... yeah. This is somewhat unusual, isn't it? My memory of one winter the next is notoriously bad, but I'm going to say I usually don't remember any snow before Thanksgiving!

Ryan . . . that makes two of us! My memory from one winter to the next is also notoriously bad!
But yup . . . my gut tells me that snow in the lowlands this early in the season is a bit unusual. That's OK with me. Now that the autumn foliage season is about gone, I’m ready for XC-skiing and snowshoe hiking! :-)

That is one of our favorite running routes! We usually to up either the Col Trail or Undercut and head down to Five Finger Point Trail. In the summer the little beaches offer a great cooling off spot. You've captured the area beautifully in your photos.

Thank you Noël for your kind comments!

The Lakes Region is such a beautiful area, especially around Squam Lake. And it’s simply terrific that you are able to further enjoy the beauty of this area by having a running route there!

Excellent report, John, with beautiful, crisp photos! A great choice for late October. Five Finger Point is a real gem. Last time we were there Carol and I were chased off by a thunderstorm!

Hi Steve. Your generous comments are most appreciated!
Regarding my snapshots, the credit I can take is for pressing the shutter button.
Mother Nature did all the rest! It was truly a "point and shoot" type of day! :-)