Hooray! It's Okay! (Mt. Tremont Trail after the Storm)

Aaahh! What a sigh of relief!  I feel so fortunate!   Just like my other adopted trails, the Mt. Tremont Trail suffered no significant damages resulting from Hurricane Irene.

Although my adopted trails came though the storm okay, many trails, roads and bridges here in New England suffered extensive damage.  One of the casualties was the bridge over the Sawyer River on U.S. Route 302.  It is currently closed for several weeks to make repairs.  That particular bridge closure had an impact on the drive to the Mt. Tremont trailhead from my home in Bethlehem.  My usual round-trip highway journey of 60-miles was transformed into a 130-mile expedition!

Normally, I can hop onto Rt. 302 in Bethlehem and drive that road directly to the trailhead. However, due to the bridge closure,  I needed to travel a rather circuitous route employing Rt. 302 eastbound, then Rts. 3, 115, 2, 16, and then Rt 302 westbound to the trailhead.

When I arrived at the trailhead, I was somewhat surprised to see other cars parked there, especially since there are numerous signs along westbound Rt. 302 indicating that the road is closed beyond Bartlett.  Regardless, during the course of my trek along the trail I met up with these other hikers.  One group was from New Hampshire, and the other from Connecticut.  They were all having a wonderful day of hiking in the Whites!

As indicated earlier in this report, the Mt. Tremont Trail suffered no significant damage from the storm.  However, a few segments of the trail did experience some erosion due to the heavy amount of water running down the trail.  In terms of fallen trees, I removed three from the trail corridor during this visit.  There are still a few downed trees that I'll need to address on a future maintenance trip.  But, please be assured that with only a slight break in your stride, each of those remaining blowdowns can easily be stepped over or ducked under.  (That is a true statement as of the day of my visit on 09-Sep-2011.  Things can happen quickly in the forest.  Who knows when another tree might fall onto the trail corridor!)

Okay, it's time for some pictures!  I'll start with a photo of my favorite waterfall along Stony Brook on the lower end of the Mt. Tremont Trail. 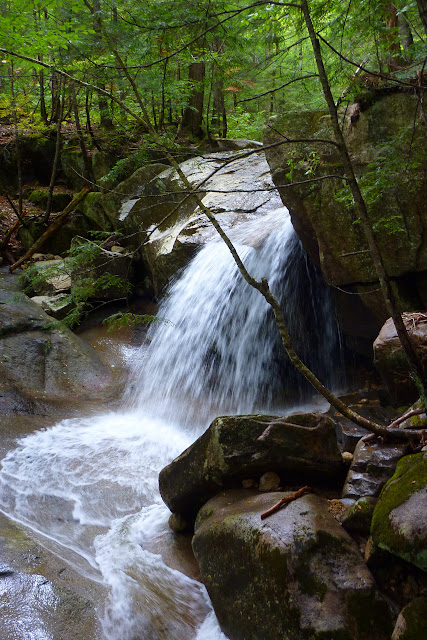 Higher up on the trail, there is a nice northward vista toward the Presidential Range on the horizon, along with some other notable mountains such as Stairs Mountain, Mt. Resolution. 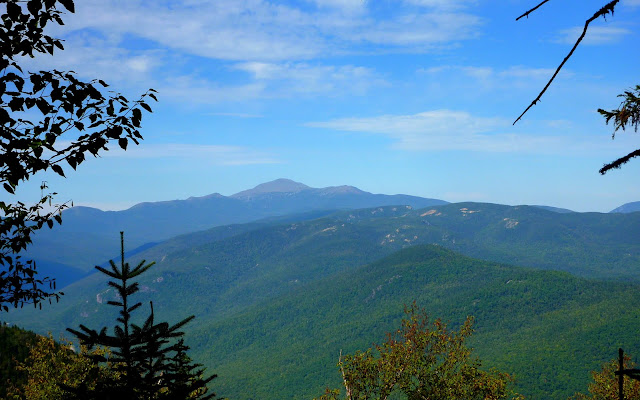 There were some pleasant trailside views as well.  I don't know the names of mushrooms, but whatever it's called, this particular variety is so colorful and it's one of my favorites. 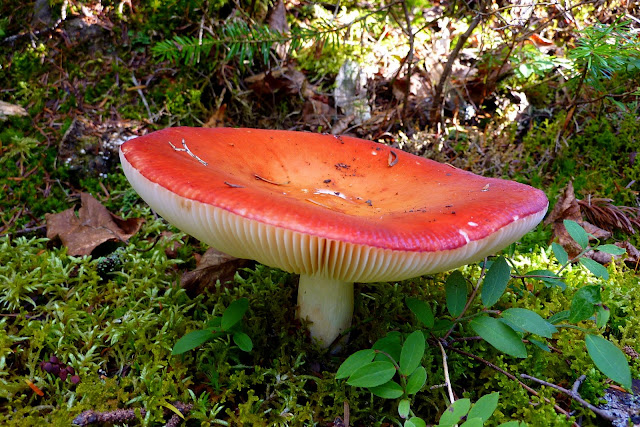 Growing on the side of a tree was the rather peculiar mushroom shown in the photo below.   It's sort of unsettling when a mushroom stares back at you! 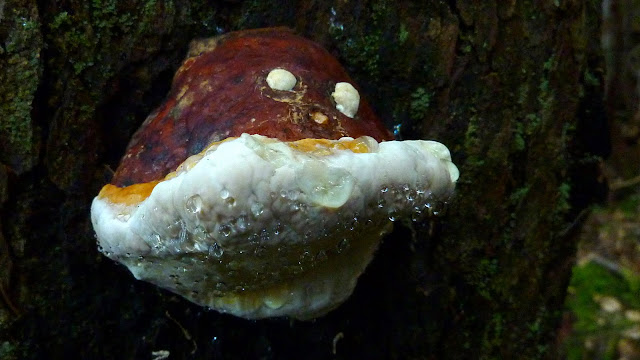 Upon reaching the top of Mt. Tremont, there were all the usual views, especially since it was such a beautifully clear day.  The series of snapshots below shows a few of these vistas.
Mt. Carrigain and Carrigain Notch 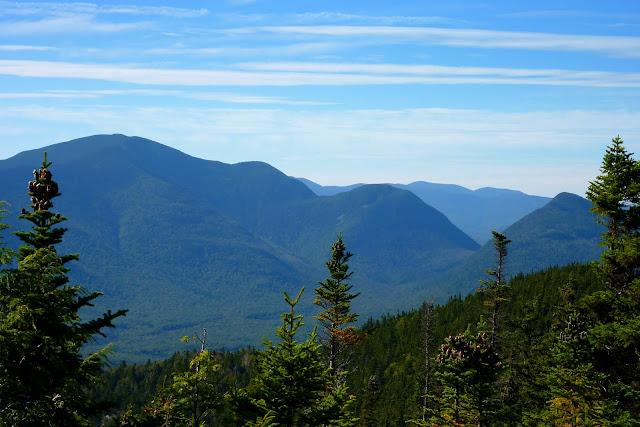 Sawyer Ponds and nearby Green's Cliff 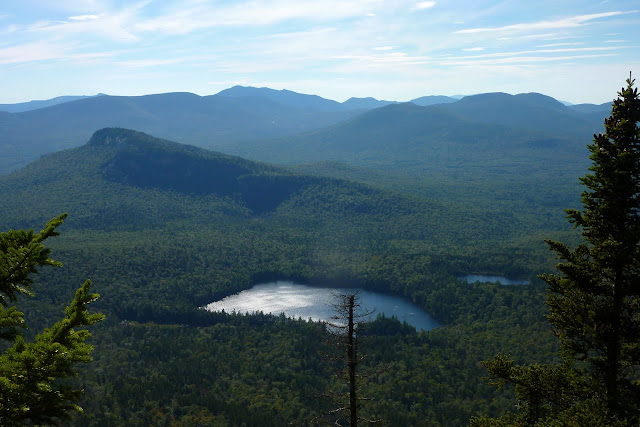 Southerly view toward high peaks in the Sandwich Mountain Range 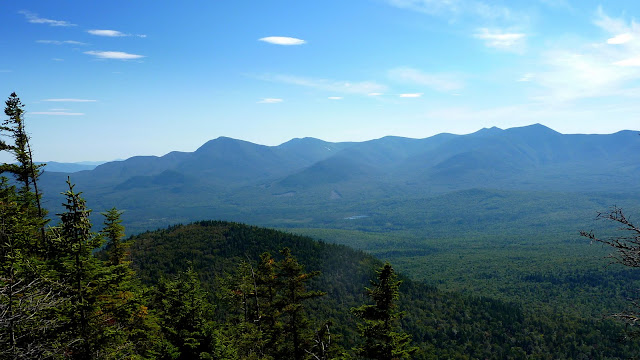 Highly zoomed photo of the rocky top of Mt. Chocorua 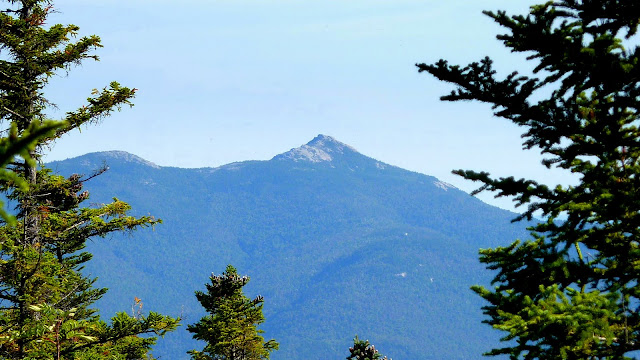 The time spent on maintenance of the Mt. Tremont Trail was less than I had anticipated.  And so, on my way home I had time to make a brief stop at the Hall's Ledge trailhead to do a cursory check for storm-related damage.  Since the first 250 ft (or so) of this trail runs along the Ellis River, I thought there might be some trail damage due to the river having overflowed its banks.  However, it was terrific to find that this portion of the trail was totally intact!

Shown below are two photos.  The first one was obviously taken at the trailhead for Hall's Ledge.  The second snapshot shows a view from the trailhead looking toward Mt. Washington. 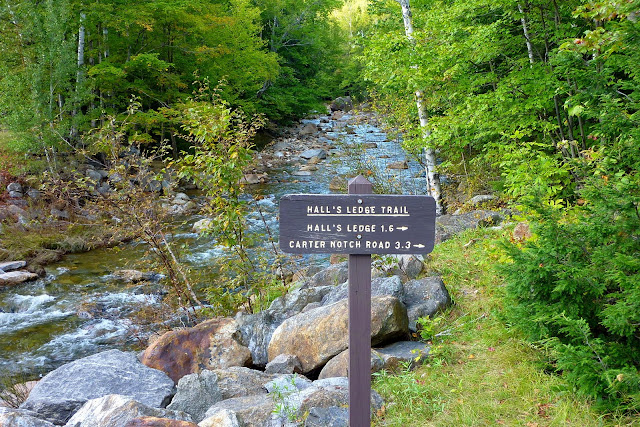 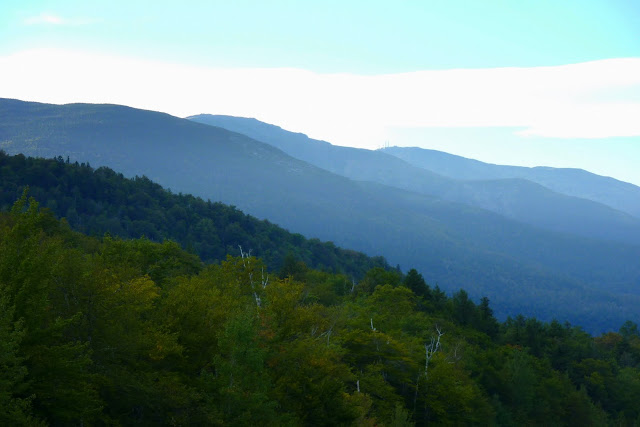 To sum it up, I think most Trail Adopters would agree that your adopted trails become almost like "family", and it's painful when one of them suffers some damage. Fortunately, my "family" survived the storm with only a few minor "cuts and bruises". For that, I'm very thankful.  My sympathy goes out to those adopters who were less fortunate with their trails.
Posted by 1HappyHiker at 11:00 AM

That's terrific news, even though it was quite a journey just getting there. Even better there were people out there enjoying the trail! I think it is great that you care so much about your trails. I've only done a very small amount of trail work and can understand why you feel the way you do.

I've noticed quite a bit of fungus in my own front yard and on the trails, probably because it has been so wet. I looked in my field guide to N. American mushrooms and the red one might be some sort of Russula variety. It fits the written description, but I'm not an expert in White Mountain fungus. The one on the tree is not a relative of Jabba the Hut, but likely a Polypore, which happens to like to grow on conifers. As a side note, the variety and colors of fungus is quite amazing - my field guide has colored photos!

That is great to see that your trails suffered no damage! I have a lot of respect for people who take care of trails. I can't even begin to imagine how much work goes into making trails hiker friendly.

SUMMERSET: Thank you for posting a comment. First of all, I loved your "Jabba the Hutt" remark relative to my photo of the fungus on the tree! I had not made that connection!

And, regarding my photo of the reddish mushroom, I sort of thought it might be of the Russuala variety, but wasn’t certain enough to make that statement. So, it’s great to read your comment which confirms my thought!

Regarding how much work goes into making trails hiker-friendly, if you’re familiar with some of the precepts of Murphy’s Law, one such law states: “In nature, nothing is ever right. Therefore, if everything is going right, then something is wrong.”

Dunno exactly why, but somehow that precept popped into my head when formulating a response! :-) Yup! There’s always something that needs to be done to keep a trail hiker-friendly!

It certainly was a great day for a hike and we definitely appreciated meeting you along the way and your work made our trek down much easier at that brook with the big blow down - What a difference. The amount of different fungi were most impressive in their color,shape and location. What a beautiful trail so close for those who spend a great deal of time in Bartlett. I look forward to sharing it with others. A great way to spend a morning or afternoon. Thanks again - Katee and Ira

KATEE and IRA: Wow! What a pleasant surprise to receive a comment from you guys! It was wonderful to meet both of you. And, it’s quite gratifying when I meet folks like you who are enjoying a trail that I maintain. It makes it seem all worthwhile!

Your pictures are amazing. I love trails with expansive views and it looks like you had a gorgeous day for this hike. Congratulations on your trail maintenance work; I love the fact that people like you are out there providing a quality outdoor experience for those of us who prefer quiet recreation.

RITA: First of all, thank you for posting such a nice comment.

And secondly, I just accessed your Blog (http://www.onedayinamerica.blogspot.com). WOW! What an awesome set of travels you have experienced! Your narrative and photos are simply superb!

Sounds like a great hike! I really enjoyed your summit photos and the fungus face! I have seen a few really interesting ones as well! Hope you get out there this fall!

Wow! I really enjoyed reading all about your hike! The pictures are amazing. One day I would also like to hike in the Great American Mountains! Thank you for sharing.

ReluctantAdventurer: Thank you for your comments. Very much appreciated!
I just read some of your Blog postings about your adventuresome hikes in your part of the world, i.e. South Africa.
Very nice!