As indicated in the title of this Blog, this will just be a "Cliffs Notes" version of a trek to the huge cliffs on the south end of Bald Cap Peak which is located in the Shelburne, NH area.  Within a few days, a much more detailed version of this adventure will be presented in Steve Smith's blog (Click HERE to link to his blog.)

Before embarking on this bushwhack adventure, Steve and I took some snapshots of our target from the ledges atop Middle Mountain. (Please bear in mind that any of the photos can be ENLARGED by clicking on them.)

Shown below is a wide view of the ledges. 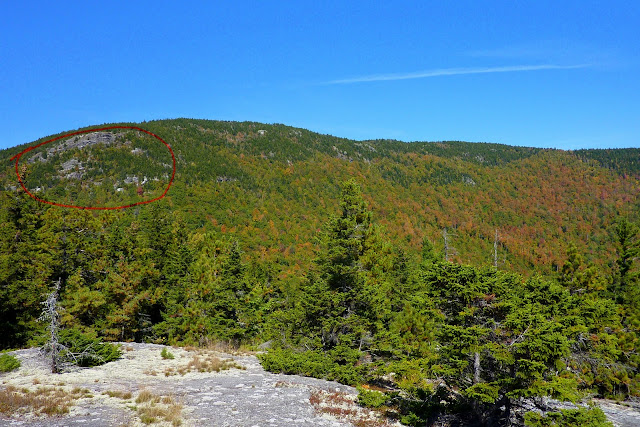 The next photo is a zoomed close-up view of the ledges. 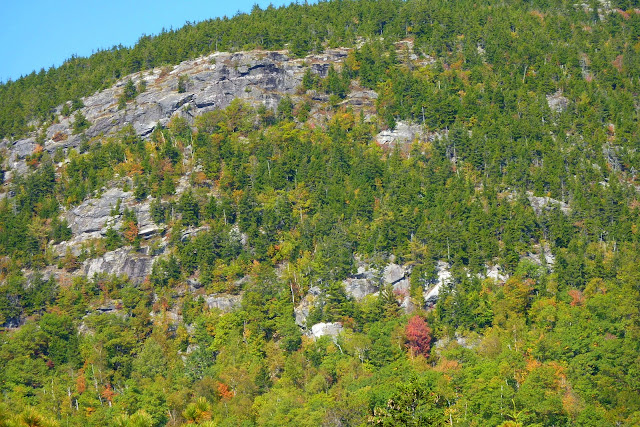 Many decades ago, there was a conventional hiking trail to the cliffs on Bald Cap Peak.   Steve and I feel fairly certain that some segments of our route retraced the pathway of that old trail which was abandoned long ago.   There were remnants of a trail corridor here and there, and we spotted an occasional cairn, such as shown in the next photo. 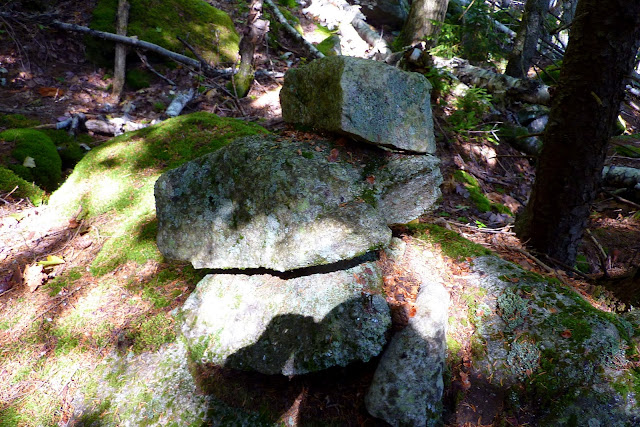 As would be expected, our climb to the top was sometimes steep.  And at times, it involved some crawling (next photo). 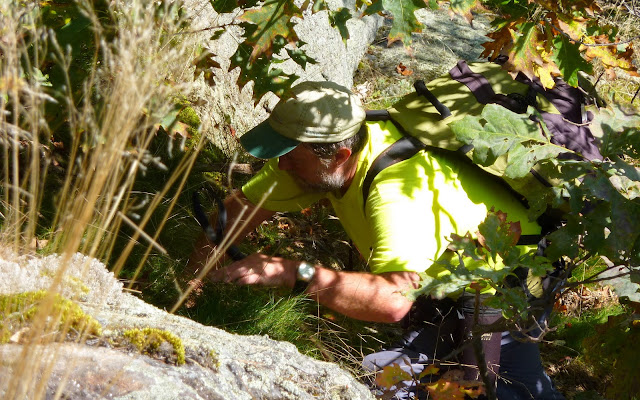 A few tricky maneuvers were involved just before reaching the top of the cliffs.   The next photo shows Steve making one of those maneuvers. 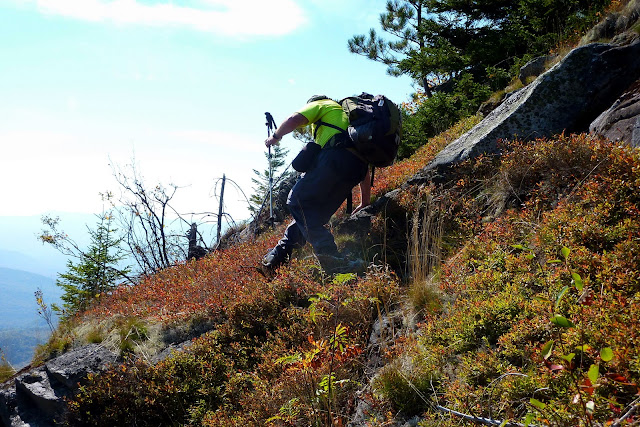 From these cliff tops there is a very "airy" feeling!  However, the top is spacious and flat-enough so that there is never a feeling that you might fall over the edge.  But obviously, caution must still be used when moving around.
I'll limit my snapshots to what I consider as the more dramatic views from the top of the cliffs.  One such view is the vista looking eastward over the Androscoggin River valley with Middle Mountain in the immediate foreground.  The next snapshot shows Steve taking a photo of this panorama.  Circled in red are the ledges on Middle Mountain where we stood earlier in the day to take snapshots of the cliffs.  It's fun to look back on where you've been! 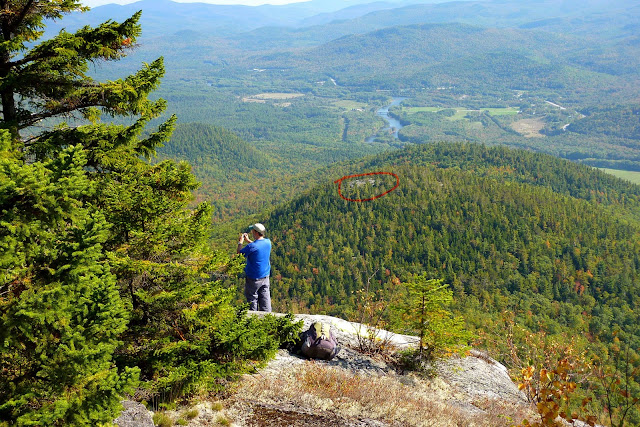 The next photo is similar to the one shown above.  It's just a wider view. 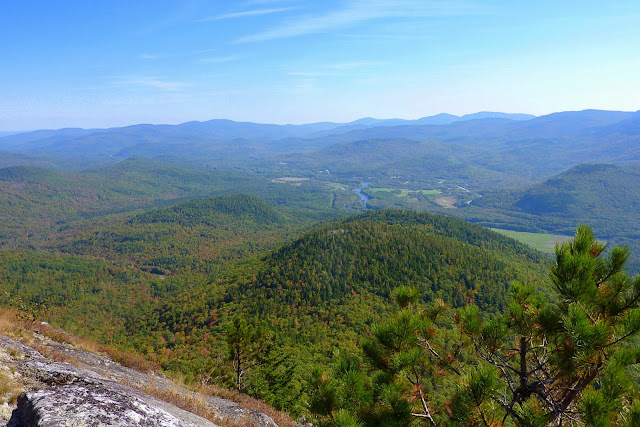 The other view that I consider as rather dramatic is the view toward the high peaks in the northern Presidential Range.  The next snapshot shows the "Presidential view" from one of the lower cliffs on the way to the uppermost cliffs. 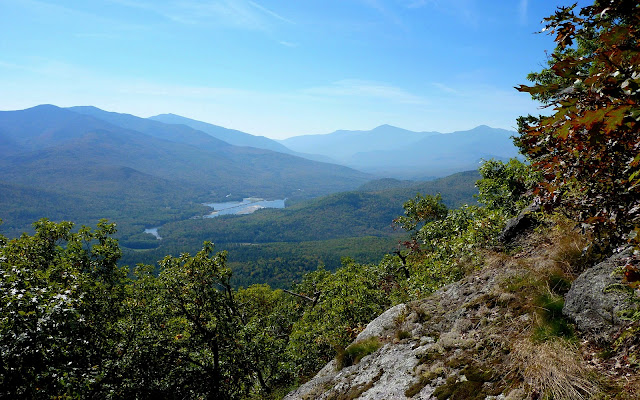 For our descent, we opted to take a different route.  In large part, this was done just to do something different rather than merely retrace the same route used for the ascent.  We headed off the cliffs in a westerly direction to intersect the Peabody Brook Trail.   We had hopes of possibly coming across another set of ledges on the southwesterly corner of Bald Cap Peak.  However, we ended up being slightly off-course to access those particular ledges.  But, we still managed to get a few views here and there as we descended.  Shown below is one such view which is looking toward the Presidential Range, and is similar to the view we had earlier in the day from the main cliffs on Bald Cap Peak. 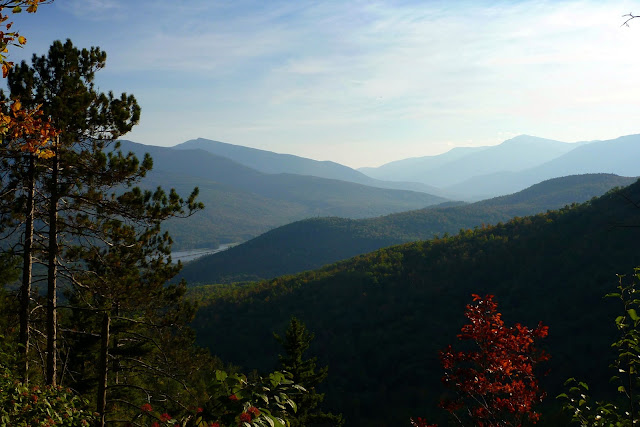 To sum it up, it was a beautiful sunny day for a simply terrific bushwhack adventure.   It was one of those times when the expression "Life is good!" leaps immediately to mind.
Posted by 1HappyHiker at 1:08 PM

"It's fun to look back on where you've been!"

That's one of my favorite things in hiking-- looking at another mountain or clearing and thinking "Wow! I was just there!"

Your trip reports from this area are pretty fantastic. I like how you look up at a rocky cliff and just decide to go there, regardless of the lack of trails. Someday I want to try that some more.

Thanks for posting your comment, Ryan!
Not to get overly philosophic, but regardless of whether it’s hiking, or life in general, it can sometimes be pretty darn cool to look back at where you’ve been! :-)