We've recently had family visiting us.  Although we did a couple of short, mild-mannered hikes, it has been well over a week since I've been free to do the type of hiking that is customary for me.  With all the hubbub of seeing everyone off, plus the time it took to formulate a hiking plan and gather my gear, it was already late morning (nearly the crack of noon!) on 07-July before I was on the trail.
For quite awhile, I've wanted to check out the Razor Brook valley and see if I could find any remnants of the Razor Brook Trail that was abandoned in the early 1960s.  And so, my game plan was to hike a short distance up the Davis Path and then bushwhack eastward and cross over the Bemis Ridge to the Razor Brook Valley.  From there, I would trek northward up the valley to the little unnamed 2,866 ft peak.  From that peak, I'd then bushwhack to the Davis Path, take a side trip to Mt. Crawford, and return to my car via the Davis Path.
Shown below is a rough depiction of my route.  I say "rough" since I didn't run a GPS track to show my exact route.  I only used my GPS sporadically to confirm that I hadn't run too far amuck from my intended course. (The bushwhack portion is shown in red, and the on-trail segment is highlighted in yellow.) 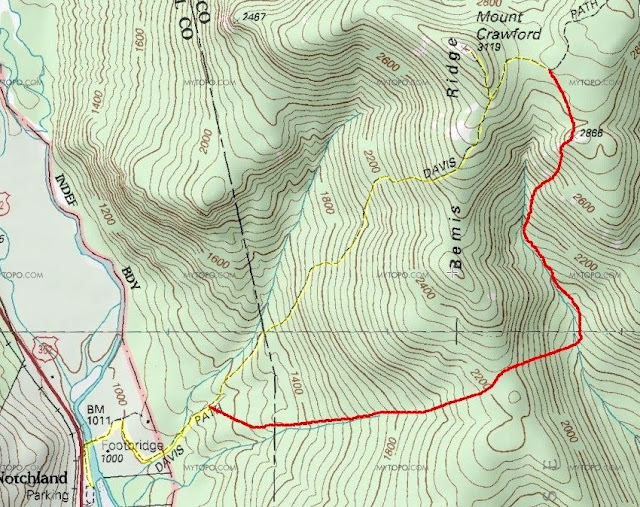 The next photo shows a portion of a topographic map from 1950 (clicking on the photo will slightly enlarge it).  The old Razor Brook Trail is highlighted in yellow.  (This trail began at a point about 2.5 miles north of Bartlett and terminated at the Davis Path just a short distance northeast of Mt. Crawford.)

This adventure went very well.  I was able to complete the approximate 5 mile hike (at a leisurely pace) in less than 6 hours.  The bushwhack portion of my trek was predominately through open woods.  The descent off the east side of the Bemis Ridge was steep, but certainly manageable.  The roughest spot of the entire journey was the 0.2 mile segment between the 2,866 ft peak and the Davis Path.  In this short segment, there were a lot of blowdowns and thick conifers to push through.  It made for some very slow-going, but I've encountered conditions that were worse.
Other tidbits about this hike of possible interest are as follows.  Upon reaching Razor Brook, the water level was low, and it was easy to cross over to the east side to the location of the abandoned Razor Brook trail. Although the brook itself wasn't noteworthy, the reflection of the blue sky overhead produced an interesting bluish cast on the water. 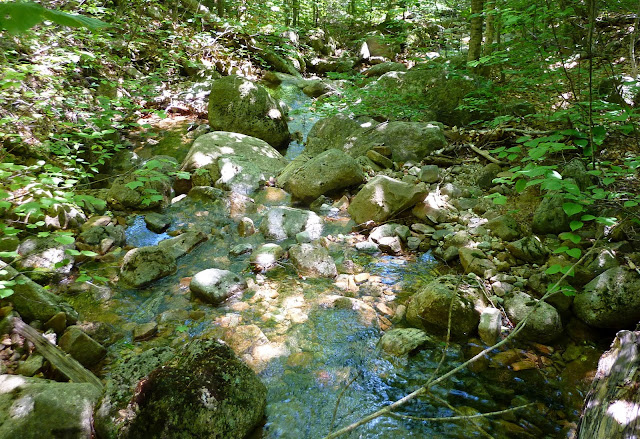 Regarding the abandoned Razor Brook Trail, it's likely that I was hiking on segments of it here and there.  However, I cannot say with absolute certainty that the corridors that I came across were indeed the old trail.  Perhaps they were merely animal trails of some sort.  And maybe I simply didn't look hard enough, but I didn't find any old blazes on trees, nor did I see any signs of axe blazes.  I wasn't disappointed with finding no confirmatory indicators of the old trail.  There were no preconceived notions as to what might be found.
Shown below is one of the corridors that I came across.  The snapshot was taken by stepping slightly "off trail".  Even with the "trail" being outlined in red, I realize it's still difficult to make out.  It's the best I could do with my "point and shoot" camera, and my limited photographic skills. 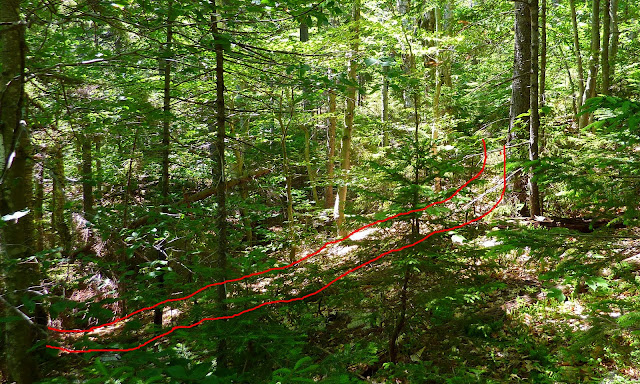 Eventually, I began to head easterly for my climb up to the 2,866 ft peak.  There were a number of spots along the way that provided nice views such as shown in the snapshot below. 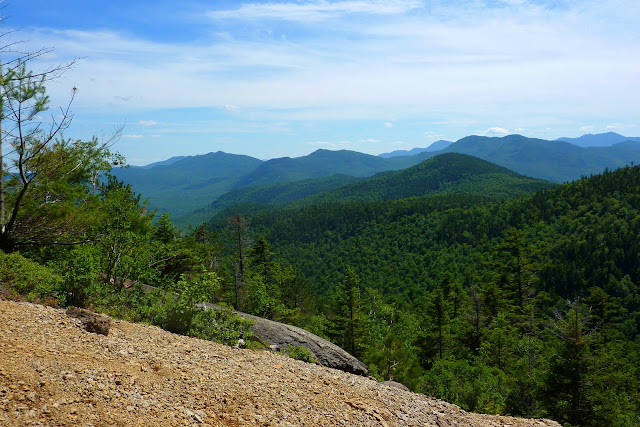 Upon arriving at the top, there were plenty of unobstructed views.  However, I purposely included some foreground "obstructions" in the snapshot below.  It's my feeble attempt at providing some sense of the scenery at the top, as well as one of the views from the top. 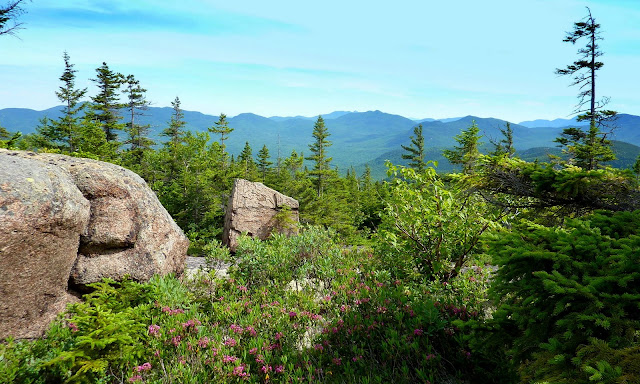 Besides the view shown above, another notable vista was seen by looking "across the street" at the scree-covered slopes on Mt. Resolution. 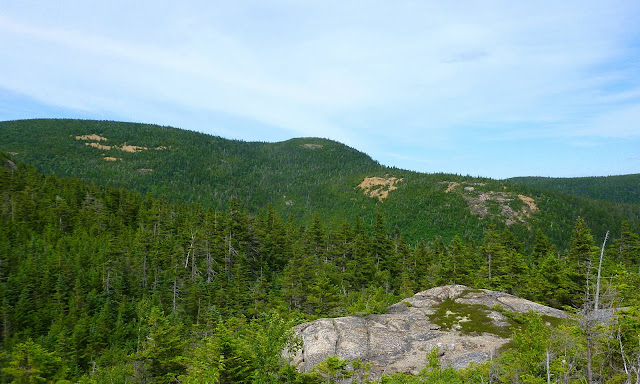 After lingering for awhile on the 2,866 ft peak, I did the final leg of the bushwhack portion of my hike.  As mentioned earlier, this 0.2 mile segment was the toughest part of the entire journey.  Upon intersecting the Davis Path, it was a very short and quick sprint to reach the top of Mt. Crawford.  From there, I was able to look back on the 2,866 peak where I'd been standing less than an hour ago.
The next photo is a "FROM/FROM" composite photo (i.e., FROM the 2,866 ft peak looking at Mt. Crawford; and then FROM Mt. Crawford looking at the 2,866 ft peak). 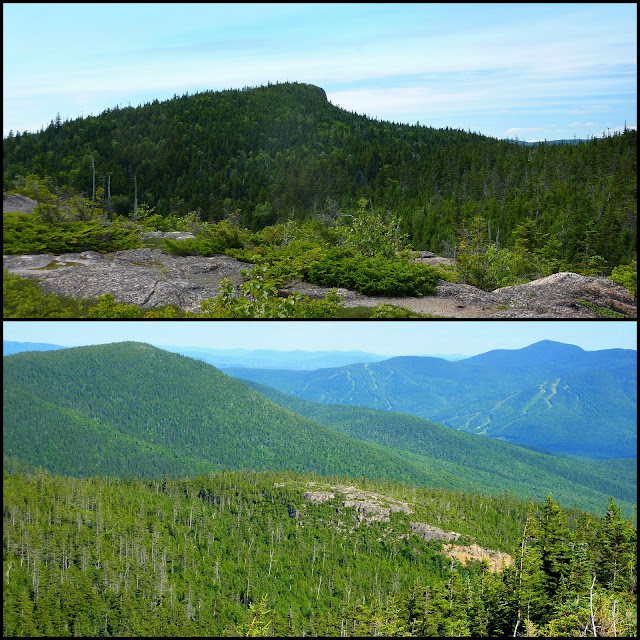 Of course, there were the usual lovely views from the top of Mt. Crawford.  My particular favorite is the vista that includes the Presidential Range and Stairs Mountain (photo below). 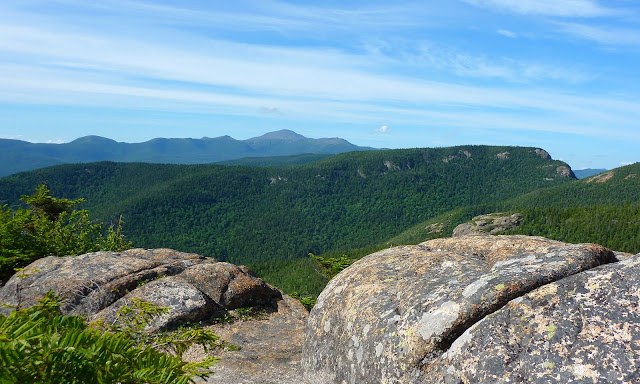 And speaking of Stairs Mountain, I "get it" as to why it is named Stairs.  However, it's probably just me, but each time I look at this mountain, in my mind I see a huge diesel train engine.  Take a look at the photo below, and perhaps you'll see what I mean!? 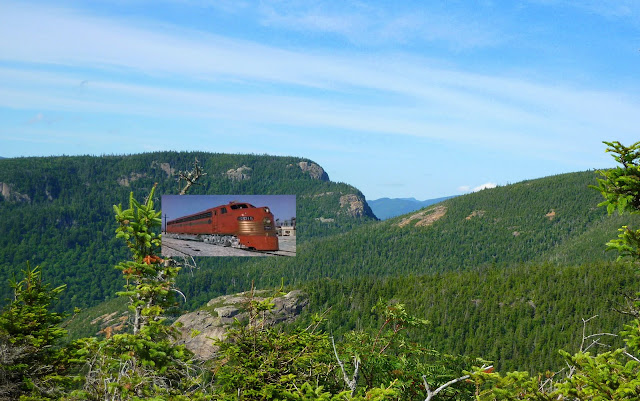 To sum it up, the family visit was great, but it was also great to be back out on the trails and doing the type of hiking I love to do.   I fully realize that for many folks, the type of hike presented here has little appeal.  Nonetheless, I opted to post it anyway since some readers might find it mildly interesting.  It certainly provided me with a lot of enjoyment, and it was exactly the type of adventure I was seeking on this particular day.

Very nice my friend. I can't wait to do this type of whacking myself.. c'mon feet, get with the program!

This is so cool, I love reading about the old trails in the old guide books and then reading trip reports and looking at the pics of hikers exploring them. Thanks for sharing!

@Tobit: I'm rootin' for your feet to "get with the program" and provide you with transportation for many fun explorations of your own. Now just keep those fingers healthy as well so you can do postings to tell the rest of us about your exploits!

@Chris: It's so cool to hear that there are folks like you out there who find this kind of stuff to be of interest. Thank you for taking time to post a comment!

Excellent report and nice creative route, John - you certainly made the best of a half-day! My old bushwhacking cohort Creston named that 2866-ft. peak "Crawford's Bunion." We took the short way down from Davis Path. Just to the NE of that peak there's a cool clifftop with a great view down the Razor Brook valley, we called it "the Razor's Edge." Maybe sometime we could traverse the valley from the bottom up; the hardest part is getting in there without using private land.

Thank you Steve for posting a comment, and especially thank you for providing that information about the creative nicknames that you and Creston assigned to both the 2,866 ft peak, and the cliff located NE of that peak. I saw that cliff lurking over there, and wished I had the time to explore it. Ah well . . . it will still be there for some future exploit!

Speaking of future exploits, yes, I’d definitely like to get back into the Razor Brook valley sometime and begin exploring from a point much further south of where I entered the valley. And yup, you’re right about the tricky issue of getting in there without trespassing on the private land at the southern end of the valley.