Black Mountain is a sprawling mass that resides between Perkins Notch (to the north) and the outskirts of Jackson, NH (to the south).  One of its southern peaks (2,757 ft elevation) can be reached by hiking trail, and there are views from there.  The hiking trail to Black Mountain's northernmost peak (3,304 ft) was abandoned many decades ago.  So nowadays, this peak is visited only by those who bushwhack to it.  However, I haven't seen much posted on the Internet about these adventures.  Maybe, I've just looked in all the wrong places?!

This past Sunday (31-Jul-2011), I decided to trek up to this peak and have a look around since I'd heard that there were some views from there.   I realize that an adventure such as this will have limited appeal (much as did my recent bushwhacking trek to Sandwich Dome in Waterville Valley).  Regardless, presented below is the story about my bushwhack to Black Mountain's 3,304 ft peak.

My day got off to a late start, as often happens with me.  However, in this particular case, it might have worked to my benefit!   Just as I was approaching the junction of Rts 302 and 16, I saw a steam-powered locomotive moving down the tracks.  Never did I expect to see this train which I'd just recently read about in the newspaper.  This was a special outing for the steam engine #7470.  It was pulling a train from North Conway to Hazens (just outside of Whitefield).   No steam-powered train had made this particular journey since 1953.   By the time I was able to pull off the road and dig my camera out of my backpack, I could only get one snapshot.  Shown below is my one and only photo of the train as it steamed by. 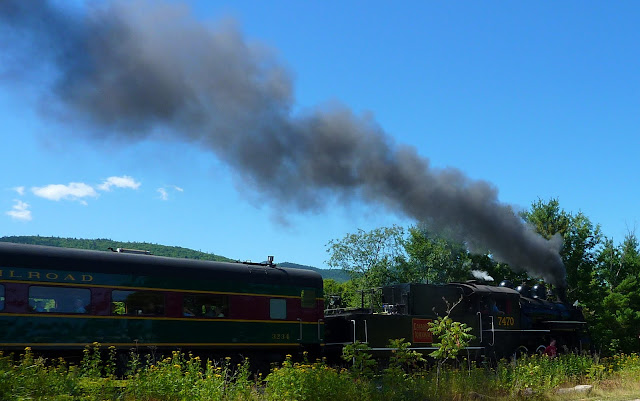 Okay, enough about the special train!  Let's continue now with the narrative about my Black Mountain adventure.  I'd toyed with several different routes, but finally decided upon the route shown in the map below.  The round-trip was about 7 miles. 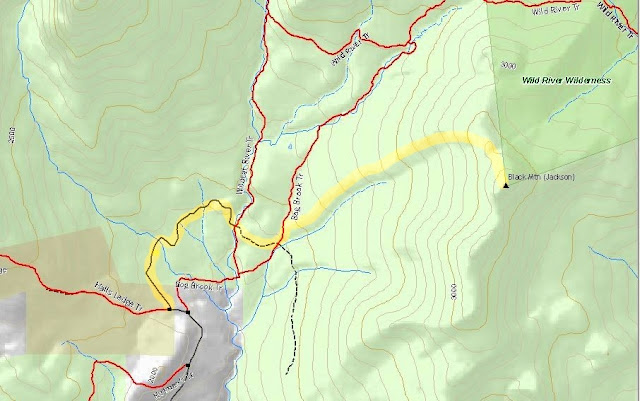 From a technical standpoint, it was an easy bushwhack.  It was simply a matter of following a gentle grade for about 1.7 miles to the top of the mountain.   However, I'm still undecided if it was the best route, especially at this time of year when the underbrush is in full leaf.   I like to see where I'm placing my feet when bushwhacking.  For large segments of this trek, the thick underbrush made it difficult to see where I was stepping.   My progress was slow in those areas, which was frustrating.

Conditions along my course of travel ranged from areas of slash (resulting from past logging operations), to areas thick with hobble bush, to rather nice areas consisting of fern and white birch.

The next photo is a collage which shows some of the conditions encountered along the way. 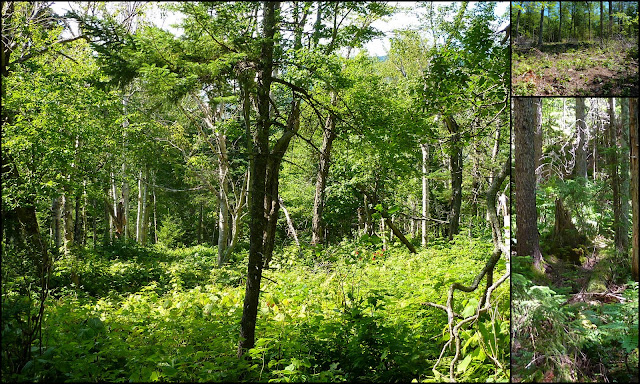 I'd heard that the top of this 3,304 ft peak was covered with low-growing vegetation with very few tall trees to obstruct the views.   As it turns out, the low-growing plants consisted almost entirely of prickly raspberry bushes!   And laying beneath them was a copious number of downed tree trunks and limbs of every shape and size.   David Govatski (retired Forest Ranger) informed me that "the trees along this ridgeline are likely being subjected to wind disturbance accentuated by shallow soils and possibly affected to some degree by air pollution weakening the trees."

Exploring the summit area was made very tedious by this combination of downed trees underfoot, and the prickly raspberry bushes that were waist-high!  It's difficult to get a true perspective of conditions such as these from a photograph.  Nonetheless, shown below is a collage of snapshots showing various scenes from the raspberry fields atop Black Mountain. 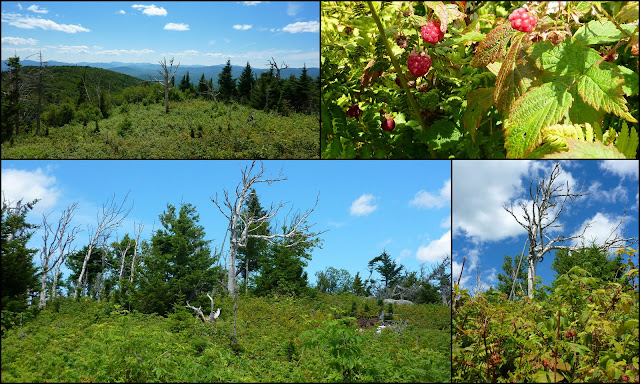 Even though it was a bit difficult to move about from place to place on the summit, I considered it to be a small price to pay for the views that were experienced.   Particularly impressive to me was the view of the Carter Notch which is shown in the next photo. 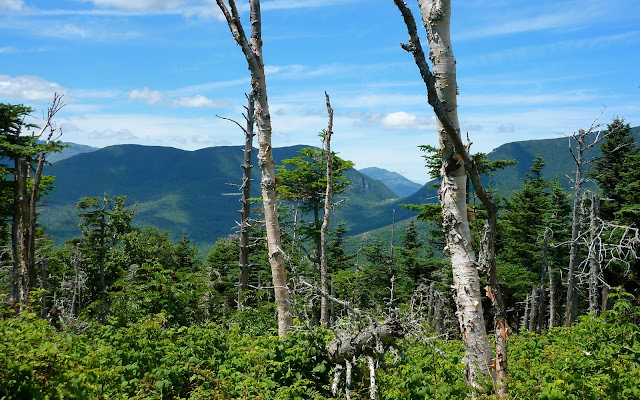 Shown below is a highly-zoomed look at the Carter Notch. 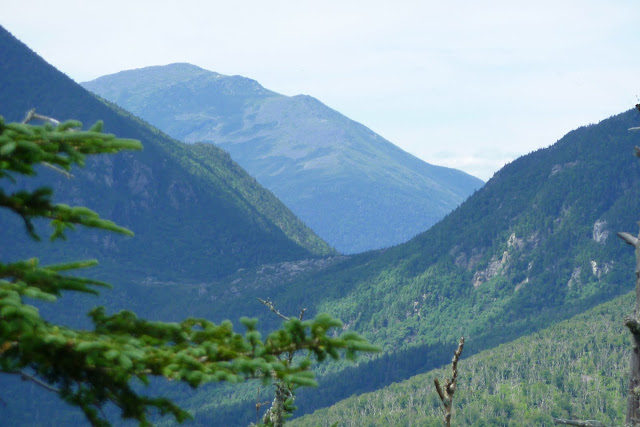 The view toward the Presidential Range was also pretty nice.  The next photo shows one angle on that particular view. 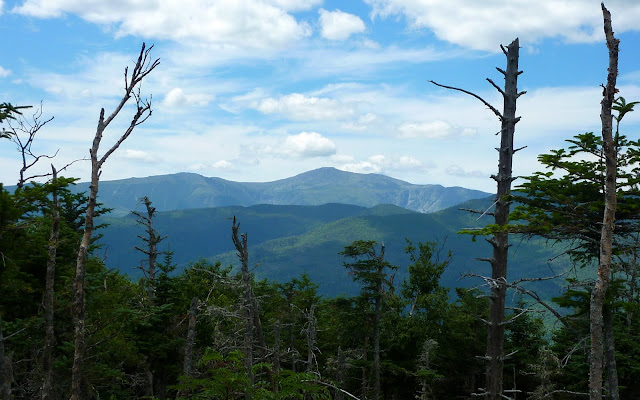 The next photo shows a zoomed photo of the Mt. Washington summit. 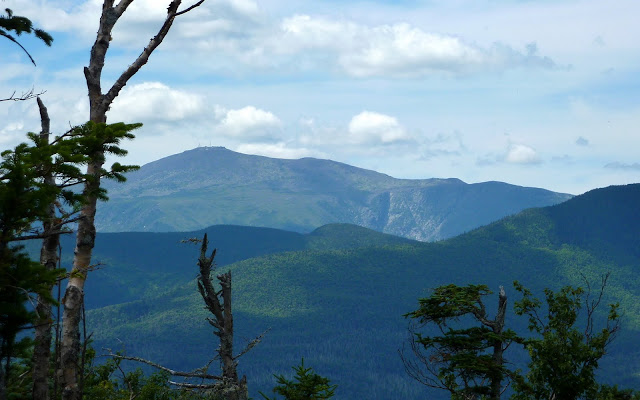 The next photo is a vista that encompasses the Presidentials, the Wildcats, and Carter Notch. 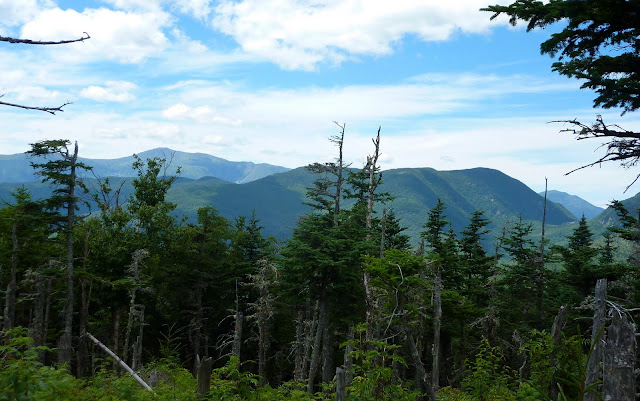 Besides the impressive vistas of the Carter Notch, and the Presidentals, there are other outstanding views to the southeast, but the tall mountain peaks are way off in the distance.   The next photo shows one such vista.  And, it also shows a large bird that just happened to be flying by with something in its beak.  (If you click on the photo to enlarge it, you can barely see the image of this bird as it passes by a puffy white cloud near the top-center of the picture.) 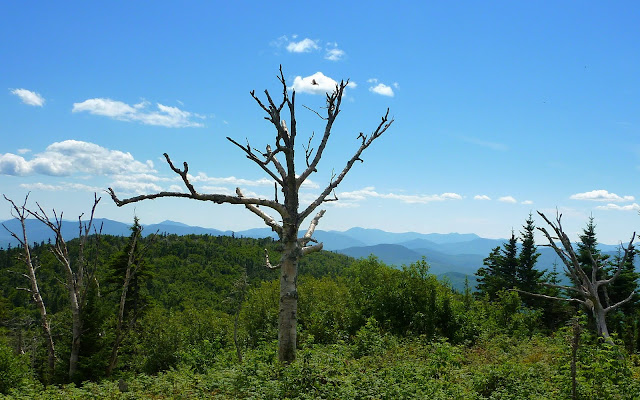 As was done for the Carter Notch, and for the Presidential Range, I also took several zoom shots of the high peaks off in the distance to the southeast.   The next photo is a collage of some of those zoom shots.   Seen here are the silhouettes of many familiar peaks such as the Tripyramids, Mts. Chocorua, Osceola, Carrigain, etc. 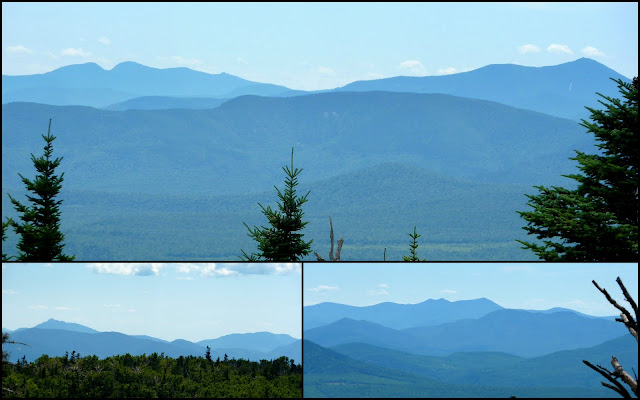 There is also a view of the Doubleheads from this location (photo below).  And I can't help but feel that there is probably a view toward the Baldfaces.  However, I quite honestly forgot about trying to find such a view.  And even if I had remembered, I'm uncertain if I would've been willing to wade any further through the raspberry bushes and downed trees! 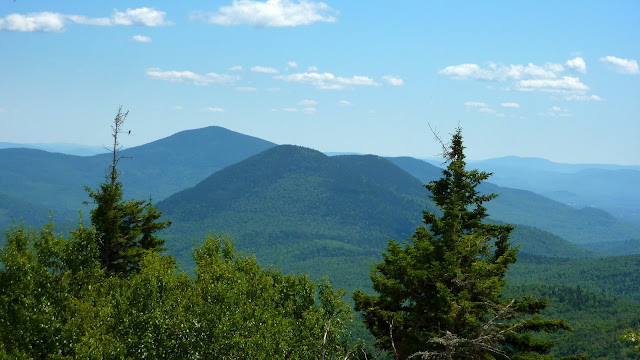 To sum it up,  the summit of this mountain was one of the more unique spots that I've visited.   During my travels, I've experienced many fine views from mountaintops located above tree-line, and from ledges, cliffs,  and from the shores of various lakes and ponds.  However, this was the first time that I've ever had such terrific views from a raspberry field!

Great trip report. I love the Jackson area and hope to move there someday. Hopefully before I retire :). I was wondered why there is no trail to the summit of this mountain. It looks like the views are certainly worth the hike up...so it surprises me the early trailblazers didn't make it accessible.

The views to Carter Notch are so impressive. The notch itself is so well carved. Definitely a great sight! I love the Doubleheads too! Another great trip!

KARL: Once again, thank you for taking time to respond to post a comment to one of my Blog reports.

Regarding a trail to the 3,304 ft summit, if I’m correctly interpreting my 1940 WMG, it appears that there was once a trail that ran along the entire ridgeline from a point near the Black Mountain Cabin to a point near the junction of the current-day Bog Brook Trail & Wild River Trail. It was called (appropriately enough) the Black Mountain Ridge Trail. I’m uncertain about this, but I think that this trail was abandoned in large part due to damage from the 1938 hurricane.

Cool report, John! That's been on my list for a while, but haven't made it up there. It's amazing how devastated the forest is. It shows up as a big snowy area when you look at Black in winter. Would be some great views - and no raspberry bushes - in March. Sounds like it was pretty tough to move around up there. Did you get torn up from the prickers?

A few years ago I visited the two northernmost knobs of Black, near Perkins Notch. There were some very old hardwood trees, and some limited views, but nothing like what you found.

Steve, thank you so much for posting your thoughts about this trek! Hey, I’d love to make a return visit sometime around March! Walking atop (rather than among) the raspberry bushes would make it so much easier to move from place to place, and discover other views which I’m certain are there.

Regarding your question about whether I got torn up from the prickers . . . surprisingly, not too much! However, my shins did get a bit dinged up from bumping into tree trunks, large rocks, etc that were hard to see with the underbrush being so thick in spots.