Every so often, I get the craving to do the short hike to Table Mountain off Bear Notch Road.  It's a relatively easy hike and it's short (3.8 miles round-trip).  Just before leaving the house to do this hike a few days ago (03-June to be exact), I decided to take a few minutes to see if I could possibly construct a loop to make this hike even more interesting.

Upon consulting my good friend named GoogleEarth, I could see a white spot at the top of a valley just north of Table Mountain.  A plan was born!  I decided to bushwhack up this valley to check out the white spot, and then after that, I'd eventually meet up with the Attitash Trail and take that trail back to my starting point.

Shown below is my route overlaid on a GoogleEarth image. 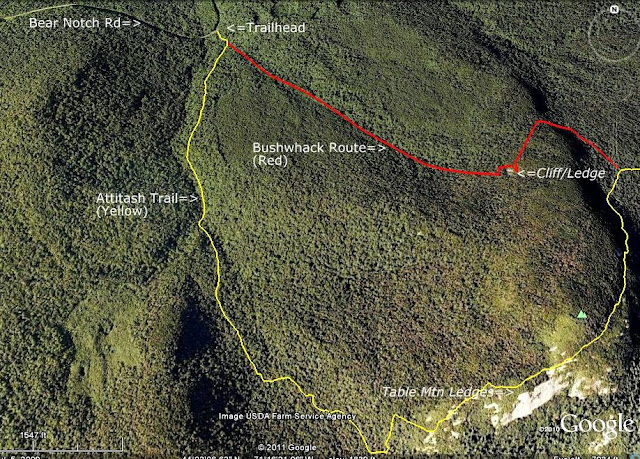 There certainly wasn't much whacking of bushes on my way up the valley to check out the white spot.  The woods were very open.  The snapshot below is typical of what was encountered along my route. 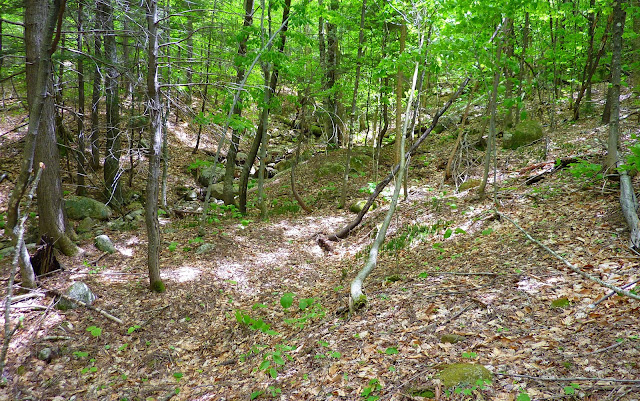 In less than an hour, I was at the white spot.  I'm uncertain as to whether this spot should be called a cliff or a ledge.  My unofficial definition of a ledge is a narrow, flat area with steep slopes or cliffs lying below; whereas, I think of a cliff as being a significant vertical (or near vertical) rock exposure.   Using my definitions, I'm thinking this spot might be more of a cliff than a ledge!

Shown below is a photo collage that shows this spot from a bottoms-up view, and from a top-down view. 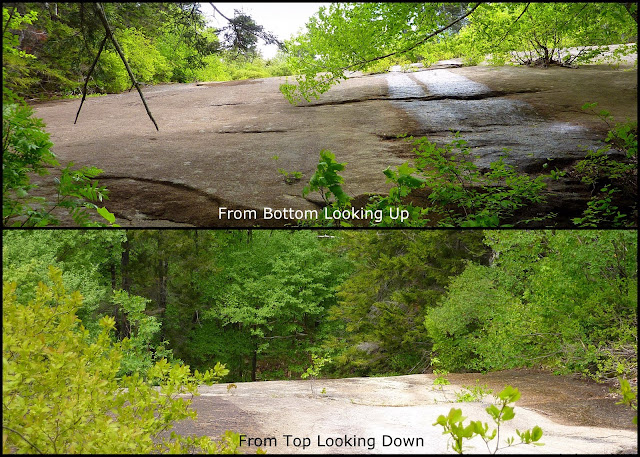 The top of this cliff is not a comfortable place to sit and lounge.  It's damp and is filled with a lot of thick brush.   However, the views from there are pretty remarkable.  If there had not been a persistent overcast on the Presidentials, the views would have been even more spectacular.

The cloud-shrouded Presidentials are on the right side of the snapshot shown below.  On the left side of the photo is the Crawford Notch plus the mountains that surround it. 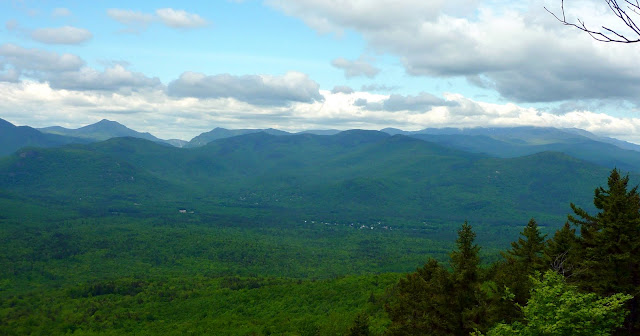 Since the Crawford Notch wasn't covered by clouds, a zoomed photo was taken (shown below). 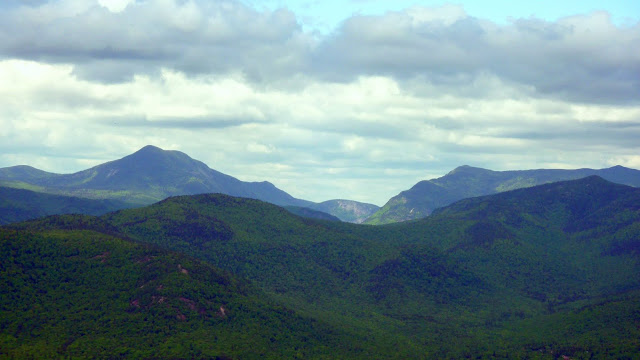 This cliff also provided a unique perspective on Mt. Tremont and Owls Cliff, as seen in the snapshot below. 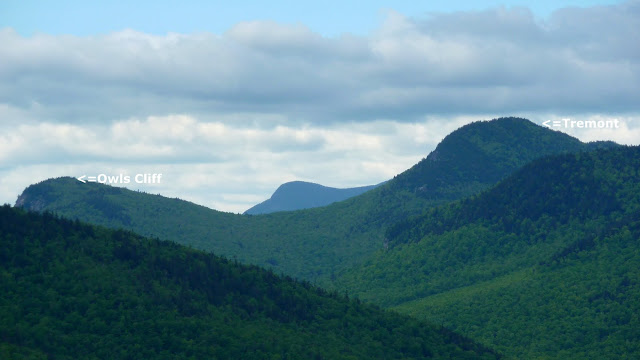 After I had my fill of the cliff, it was time to head off in search of a spot to hook up with the Attitash Trail.  It would've been shorter to head south from the cliff.   However, from prior experience I know that that the area around the summit of Table Mountain is thick with conifers.  So, I headed a bit northeasterly where the bushwhacking was easier.  Once I crossed over the ridgeline, I headed southeasterly for a short distance to pick up the Attitash Trail.

You might have heard or read that the Attitash Trail east of Table Mountain is severely overgrown, obstructed by blowdowns, and very difficult to follow.  That was true in the past, but kudos to the crew who is doing a terrific job of rehabilitating this trail (see FOOTNOTE at end of this report).

The snapshot below doesn't do it justice; however on my hike along a half-mile segment east of the ledges on Table Mountain,  the Attitash Trail had a well-defined corridor and was easy to follow.  There was only one blowdown of any significance (which I cleared). 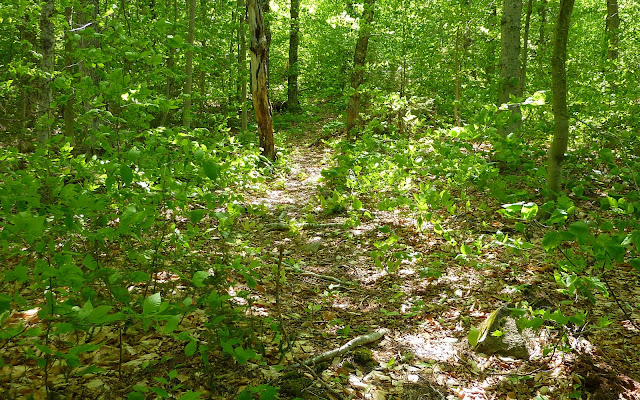 The most dramatic view from this little ledge is of the Moats, as seen in the photo below. 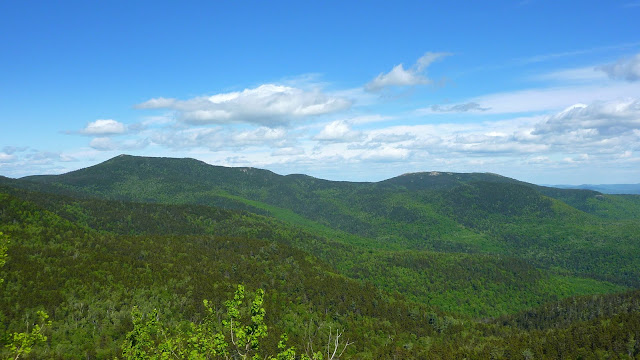 There is also a view toward Chocorua, as seen in the slightly zoomed snapshot below. 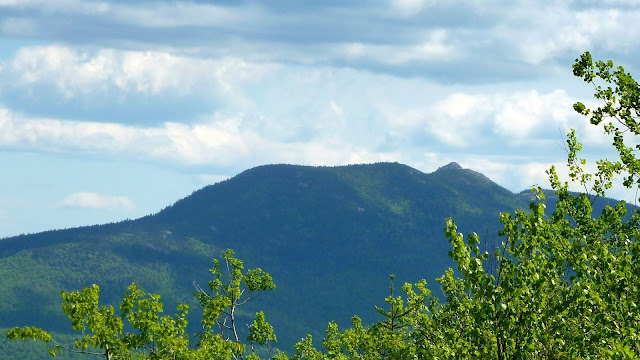 After snapping some photos from the little ledge, I headed onward and in less than 10 minutes I arrived at the main ledges on Table Mountain.  Many readers have likely been to this spot and are familiar with the excellent vistas.

The next two photos show the classic views from the main ledges on Table Mountain as you gaze toward Mt. Chocorua and peaks in the Sandwich Mountain Range. 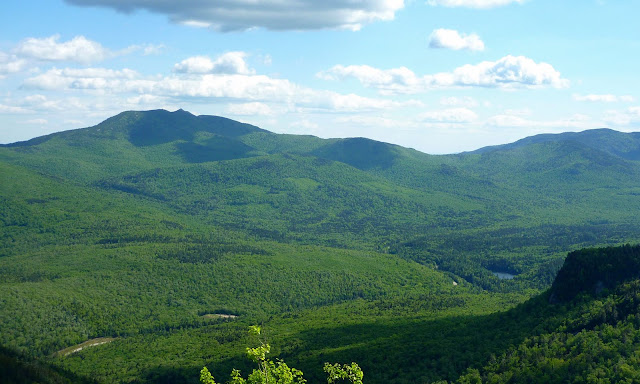 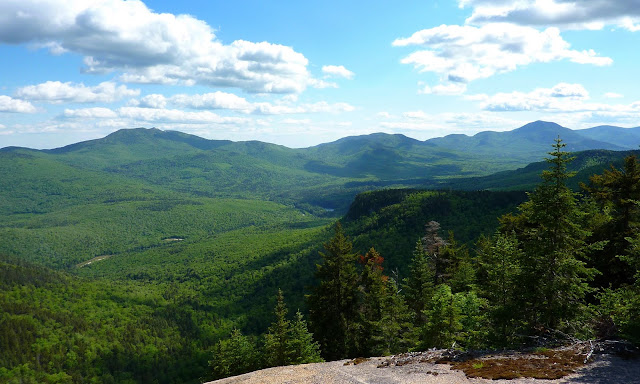 Okay, as indicated by the title of this report, it was a loop hike.  While descending the Attitash Trail en route back to my car, I was thinking how I could turn this into a genuine loop where none of my steps were retraced for any part of the route.  Admittedly, I was being a bit of a purist since continuing on the Attitash Trail back to the trailhead would only have involved retracing about 100 yards of the route used for my ascent.

Well, with "genuine loop" still on my mind, when I arrived at the brook crossing where I'd left the trail for my bushwhack, I opted to follow it downstream for a hundred yards to Bear Notch Road.  I then crossed the brook and walked a few steps to my car which was parked nearby.  That did it!  It was now a genuine loop!

By completing the loop in this manner, I got to see something I never would've seen otherwise!  It's not overly exciting, but it was sort of amazing to see a huge drainage tunnel that runs under Bear Notch Road.  There is absolutely no hint from the roadway itself that you're crossing over such a tunnel. 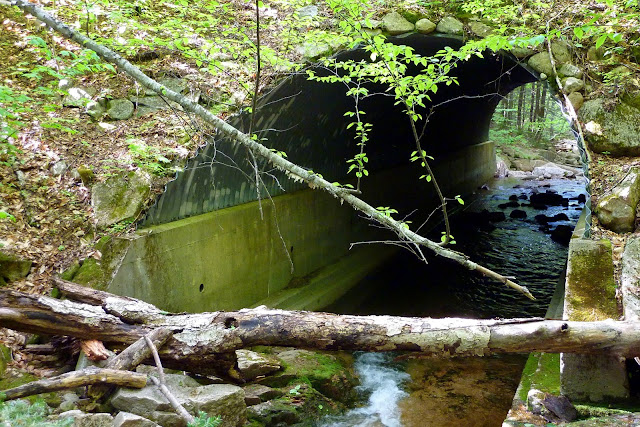 To sum it up, it's no fable that one can do a loop of Table!  And actually, now that I've done this loop and see how effortless it is, it will probably become my "standard" way of doing Table Mountain in the future.  To provide some idea as to how easy this loop is, I left my home in Bethlehem at around noon, and was back at my home about 5:30!

Great report, John - an excellent impromptu plan, and fine execution. You got some terrific views from that cliff, which makes sense as it is prominent when looking at Table from peaks to the north. Was this whack easier than expected? That does happen, once in a while!

Glad you saw that eastern view off the Attitash Trail - one of the best angles on the Moats.

Thanks for the kudos, Steve! Regarding the bushwhack portion of this trek, as with any untried bushwhack, I was unsure exactly what to expect. I sort of thought it MIGHT be easy, but was totally blown away at just how easy it actually was!

Thanks for clearing the blowdown! We (the White Mountain Milers running club) adopted the section from Table Mt. to Big Attitash a few years ago. We hope to finally finish clearing it this year. Glad you got to check out the view ledge!

Kevin, you guys really rock! That is a massive task that you’ve undertaken! I know that I’m far from being alone in thanking you for your fine work.

Although this trail might appeal to a limited number of folks, it is very attractive to folks like me who enjoy a nice tramp in the woods, and who like to use trails like this as a launch point for off-trail adventures.

Thanks again for your trail work!

Well John leave it to you to find another incredible view point. The joys of a white spot on Google Earth. Awesome!