Remembering Hikes from the Past: Southeastern Ledges on Owl's Head (Pemigewasset Wilderness)

In Steve Smith's Mountain Wandering Blog, he recently reported doing a trek into the Pemigewasset Wilderness along the Franconia Brook Trail. In his report he makes reference to a trek that he had done awhile ago with me and Chris (NeoAkela). This caused me to consider publishing a few of my hikes from the past that were particularly memorable. I'll likely only do this on an occasional basis when I have the time, and when I think that such a posting might have some general interest.

So, with the above in mind, below is a brief recollection (from my perspective) of the adventure that Steve, Chris and I undertook a couple of years ago on 27-Jan-2009.

Our trek involved a bushwhack deep into the Pemigewasset Wilderness to the 4K peak known as Owl's Head. HOWEVER, the summit of this mountain was NOT our destination. Instead, our target was to reach the ledges on the southeastern tip of the mountain. I have no way of knowing how many folks have ventured to this spot. However, based purely upon postings on hiking-related websites, it would seem that very few individuals have been privileged to witness the particular views shown in the two photos below.

The first photo is looking toward the Bond Range, and the second photo is a view toward the Hancocks and Mt Carrigain. 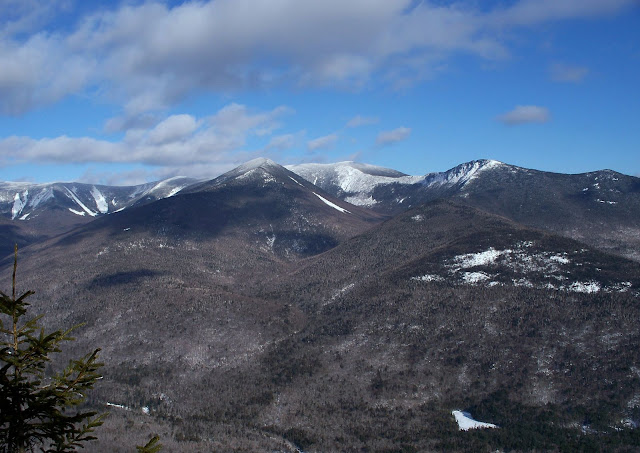 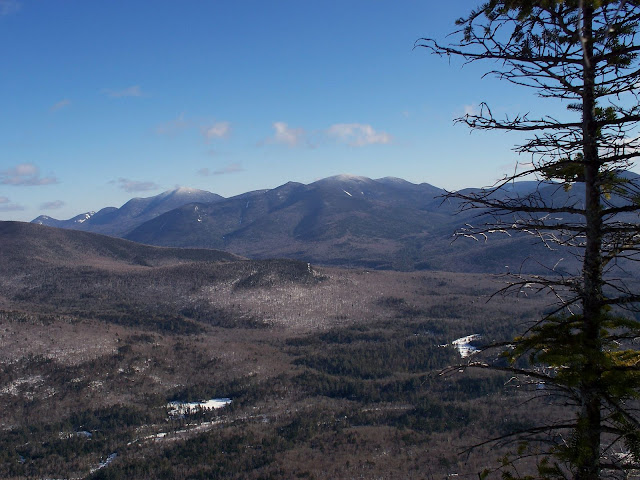 The photo below was taken from another location on another trip. A small red arrow (both in the photo and the topo map)is pointing to the general location that we visited. 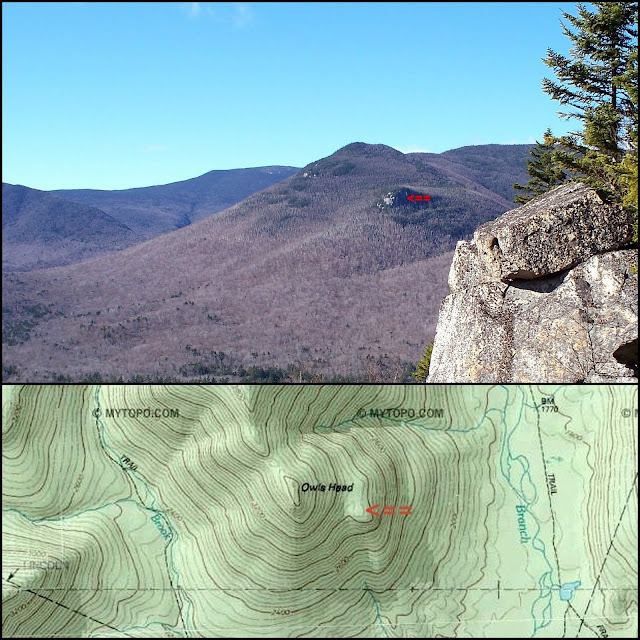 It was 6 degrees when we started our journey, but we knew it would be warming up to the high teens later in the day. So, off we went down the Lincoln Woods Trail.  Although the views walking along the Pemigewasset River are beautiful, this old logging railroad bed can soon become pretty dull (in my opinion), unless you are accompanied by other folks to talk with. If doing it alone, I've found it useful to go into a trance-like state to avoid the boredom! :)
By the time we reached the Black Pond Trail junction, we were enjoying terrific hiking conditions: cool, very light breeze, and clouds which were beginning to clear. Once we reached Black Pond we stopped for the usual photo-op of Owl’s Head looming over Black Pond. Below is a silhouette of a member of our team taking a break at Black Pond. 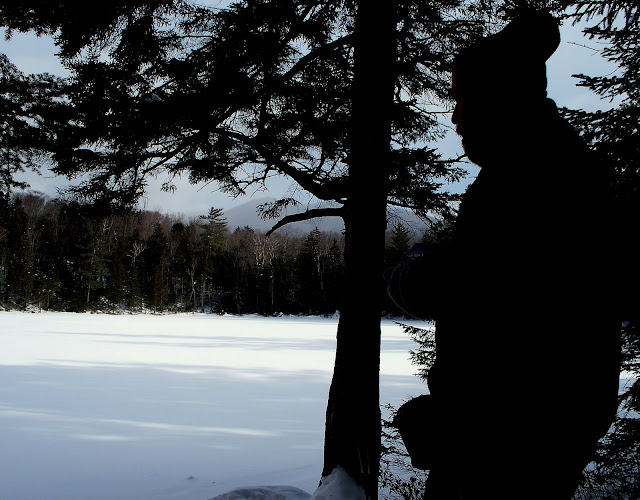 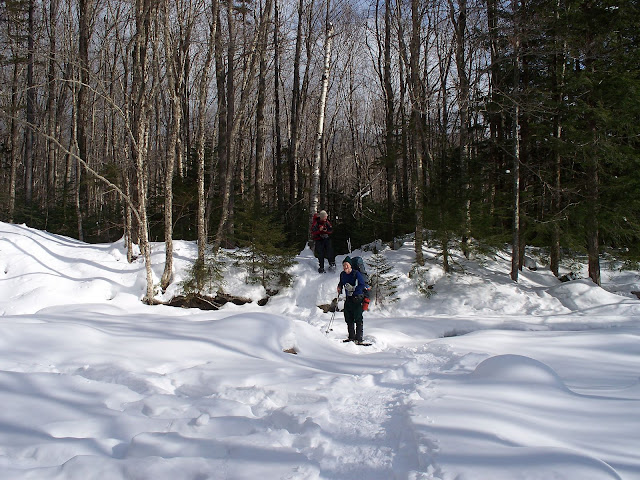 The whack up to the ledges was through mainly open woods with some beautiful birch glades. Parts of the whack were quite steep, and slippery snow conditions made for slow-going even with 3 of us rotating trail-breaking duties.

Along the way to the ledges we crossed over a century old segment of a former logging railroad located high above the current day Lincoln Brook Trail. As I understand it, this railroad traveled sort of a U-shaped route around the southern end of Owl’s Head. It’s amazing that with so many years having passed, the path of this old railroad is still quite discernable. (See photo below.) 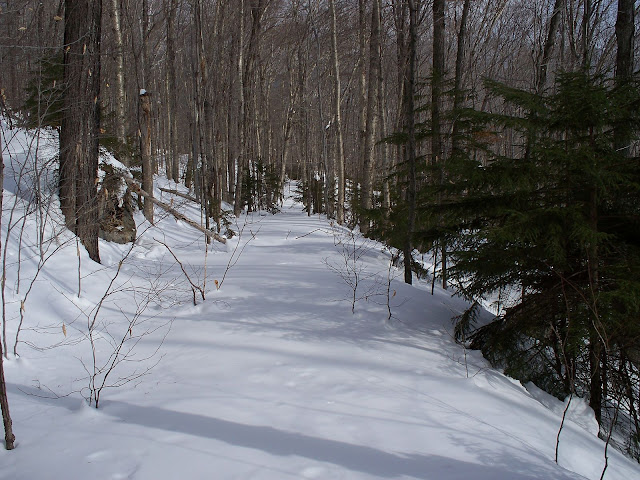 As indicated at the top of this report, we made it to our destination and got some incredibly unique views. But eventually, we had to rip ourselves away from ledges and begin the long trek back (over 6 miles staring us in the face!). According to data from Chris' GPS track-log, our total round-trip distance for this venture was 13.8 miles.

During our return, the nearly 3-mile long “Lincoln Woods death march” was traversed in the dark. But, it was a perfectly clear night and even though there was only a sliver of a moon, the light from the stars provided enough dim light so that it was unnecessary to use headlamps.
To top off an already fantastic day, we saw a shooting star streaking across the sky just as we were approaching the Lincoln Woods trailhead! It was almost as though someone had ordered an aerial fireworks display to celebrate our accomplishment!

Keep posting, as usual I love reading your trip reports and am drooling over the pictures-
In contrast to North country weather, which is rarely accurate or consistent within a mile radius, weather in Ghana is like ground hog day-
never changes- not a good place for a career in meteorology-
Later,
Marty

Marty . . . thanks so much for the positive feedback about my brand new venture into the world of blogging.

Within a few days you'll be back in New England with it unpredictable and quirky weather . . . and you'll be loving it! :)

This is fascinating and the views are so refreshingly unique! So many great vistas in the Whites that are off-trail, reserved for the true adventurers.

Thanks Owen for taking a moment to respond to my Blog!

Yup, you're so right about the getting some great vistas by off-trail travel. But obviously, as you're discovering with your NH48 quest, there are a lot of awesome on-trail vistas as well.

Finding an old rail bed like that is so cool. The summits are fun and all but everyone goes to those. It is really cool to find something with a history that few people see.

Thanks for your reply, Grant!

Agreed . . . finding an old rail bed like that is very cool! However, about the only credit I can take is that I just happened to be THERE! My friend Steve who I accompanied on that trek is the one who knew about that old rail bed. If I'd been doing this trek on my own, I might have blown right by it and not even realized it.

Speaking of "cool", I just signed up as a "Follower" for your very cool blog site (http://www.newenglandoutside.com/).