Hiking by Wandering Around!

One of the best selling and widely read business books is entitled "In Search of Excellence" by Tom Peters and Robert Waterman. A principle set forth in this book is dubbed MBWA (Management by Wandering Around). This concept basically espouses that Managers can benefit from periodically straying from their familiar paths and spending time wandering around to their employee's workplaces. The theory is that this will enable the Manager to become more attuned to their business by gathering insightful information from those at the grassroots level.
Perhaps it is a bit of a leap to equate hiking to the business world. However, I do feel that that there is something positive to be said about "hiking by wandering around". Call it HBWA, if you will! Some of my more memorable hikes have been those where I've wandered from the more familiar paths to launch explorations along paths less traveled. One such journey was a recent trek to various destinations off the Zealand Road which is located just south of the junction of Routes 3 and 302 at Twin Mountain.

Many folks (including me) seldom make side-trips off the Zealand Road. A common routine is to just steadfastly travel the entire 3.5 mile length of the road until it ends. From there, treks are launched to destinations such as the Zealand Hut and well beyond. However, on my recent journey, I broke from my traditional ways and did some wandering to various locations along the first mile of the roadway. This adventure was another occasion where I utilized a combination of cross-country (XC) skis and snowshoes. However, to do a journey similar to what I'm about to describe, one could just as easily use only one set of footwear, i.e. either XC-skis or snowshoes. Regardless of your choice of footwear, you will need to start off by carrying whatever it is! As many readers know, in winter months, you need to park your car at the lot on the north side of Route 302 and then walk 0.2 mile westward to reach the entrance of Zealand Road.

My "hiking by wandering around" began just shortly after I sat foot on Zealand Road. I stepped into my XC-skis and headed off the road onto the Flat Iron Ski Trail. This 1.3 mile trek is short but sweet. One segment winds its way through a lovely conifer forest. 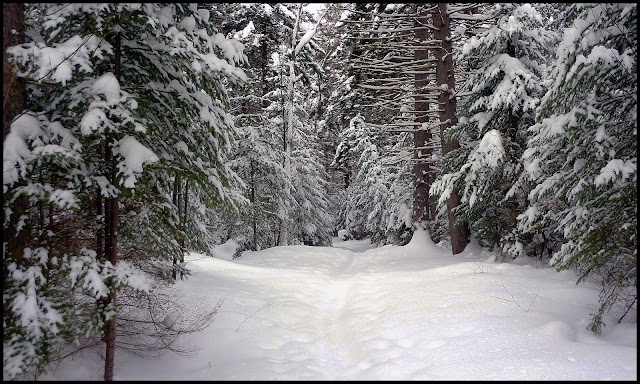 Another section of the ski trail hugs the bank of the Zealand River where the snow-covered boulders in the riverbed resemble huge puffy marshmallows. 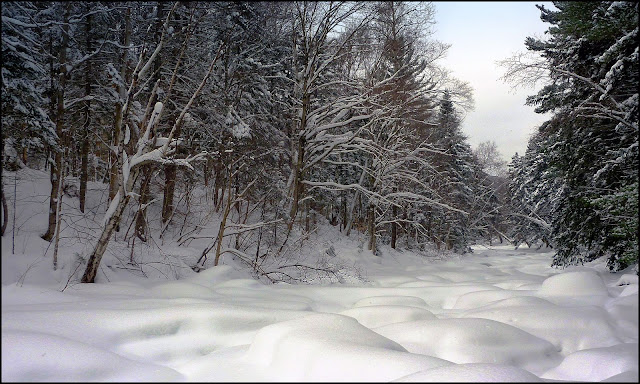 And if that isn't enough, there is also a clearing along this trail that provides a unique view toward Mt. Hale, plus North and Middle Sugarloaf Mountain. 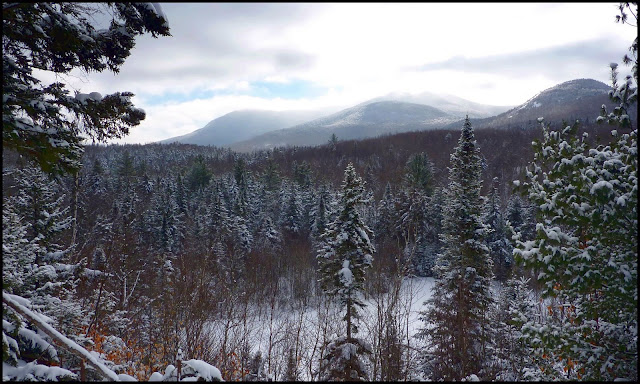 And although I'll neither condone nor condemn, I'll simply state that XC-ski trails such as this are also travelled by respectful snowshoers who stay well off to the side of the trail.

Upon completing the first of my side-trips, I returned to the main road and continued only a short distance before I left the road again to wander around the Sugarloaf Campgrounds. Although there are no grand vistas from this location, I found it enjoyable to briefly meander around. In some ways it almost seemed liked walking along the streets of a ghost town. You can conjure up images of bonfires, tents, children, and folks of all ages enjoying camping out here during the warm weather months.

I left the "ghostly" atmosphere at the campgrounds and headed further down Zealand Road to area known as the Wildlife Pond. From various locations in this vicinity there is some very pleasant scenery, such as the westward view toward Middle and North Sugarloaf Mountain. The expansive bare-rock cliffs on Middle Sugarloaf are particularly evident from here. 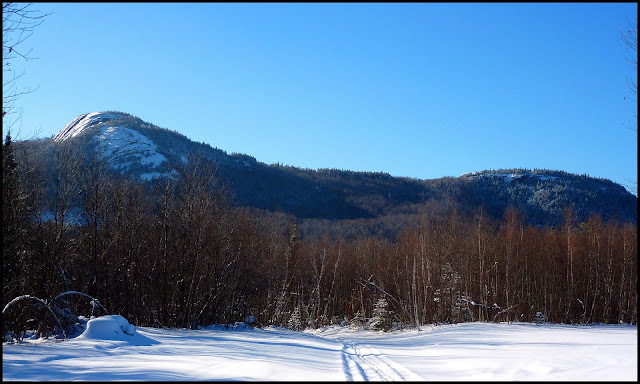 There is also quite a sweeping vista looking eastward. Mt. Tom is prominent on the distant horizon, and off to the left is the south-facing side of the Rosebrook mountain range. Over the crest of this range, and out of sight, is the popular Bretton Woods Alpine Ski area. 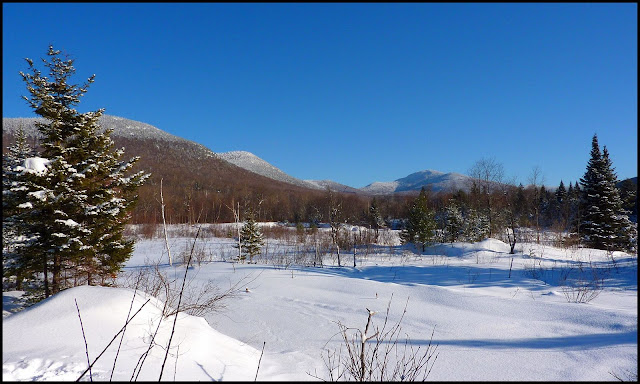 Also incorporated into my wandering journey was a trek to North Sugarloaf. But in keeping with the spirit of taking routes less-travelled, I opted not to use the conventional Sugarloaf Trail from Zealand Road. Instead, I skied and snowshoed my way up the mountain via a combination of old logging roads and former hiking-trail remnants. Regardless of how you get to North Sugarloaf, the views are enormously rewarding. When using the conventional hiking trail, there is a wonderful vista immediately upon breaking out of the trees onto a ledge. But don't settle for that! Sometimes in winter it's difficult to see that the trail angles to the right and leads to wide-open ledges that provide stunning views in nearly every direction. However, the trophy-view from here is definitely the Presidential Range! In my opinion, the view of the Presidentials from North Sugarloaf (as well as Middle Sugarloaf) is one of the best in the Whites! 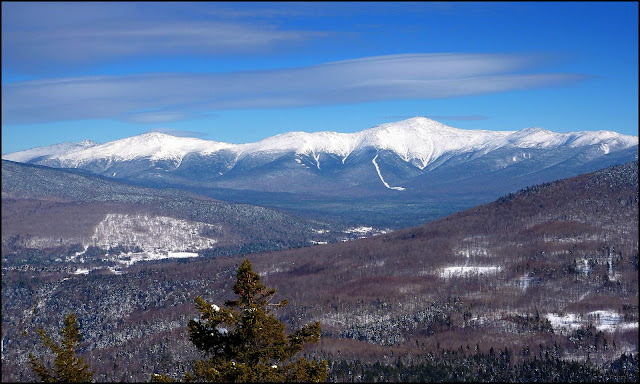 My visit to North Sugarloaf was the last stop for a very fruitful day of wandering to areas less travelled. En route back to my car it occurred to me that the worth of this type of journey is captured in a famous poem by Robert Frost entitled "The Road Not Taken". Although it's possible to interpret the poem in different ways, perhaps one interpretation might be that in both the business-world and the hiking-world there is a definite value to be derived from wandering off in new directions.
Posted by 1HappyHiker at 10:10 PM